Welcome to Chapter 5N, where night missions’ difficulty ramps up even higher and frequent repair seems unavoidable. Not only have enemy units gotten stronger, but their starting positions in battle are also farther forward, giving less time for T-dolls to kite and buy time for back-line DPSs to take care of the threats.

This Chapter is where MGSG echelons truly shines, as their burst of damage up front is going to reduce incoming damage, or RFHG echelons that will take care of back-line enemies like Nemeum. Additionally, RFHG Echelon will be relied on to take care of Manticores on 5-4n, so make sure to top up on Skill levels and equipment enhancements/calibrations if you want to minimize the repair later on.

***
Maps will consist of all armor maps or all infantry maps, so AR SMG echelons will be needed with HG replacing off tank or one of back-line. Form your echelons according to your dolls and know your echelon’s limits.
As mentioned in previous guides, all enemy movements are random, which can deviate from my routes and unit locations at the end of the turn. Adapt accordingly to your situation.
*** 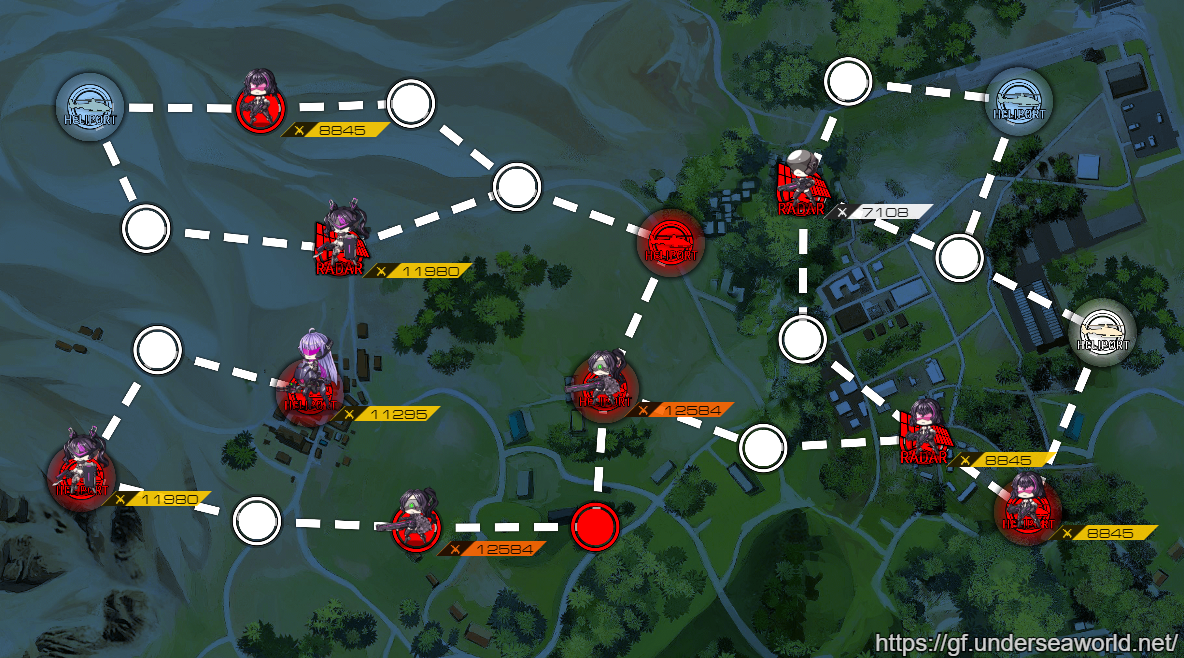 Map View. Watch out for Jaeger units in the center as they are positioned forward and in range to shoot within second of battle starting. 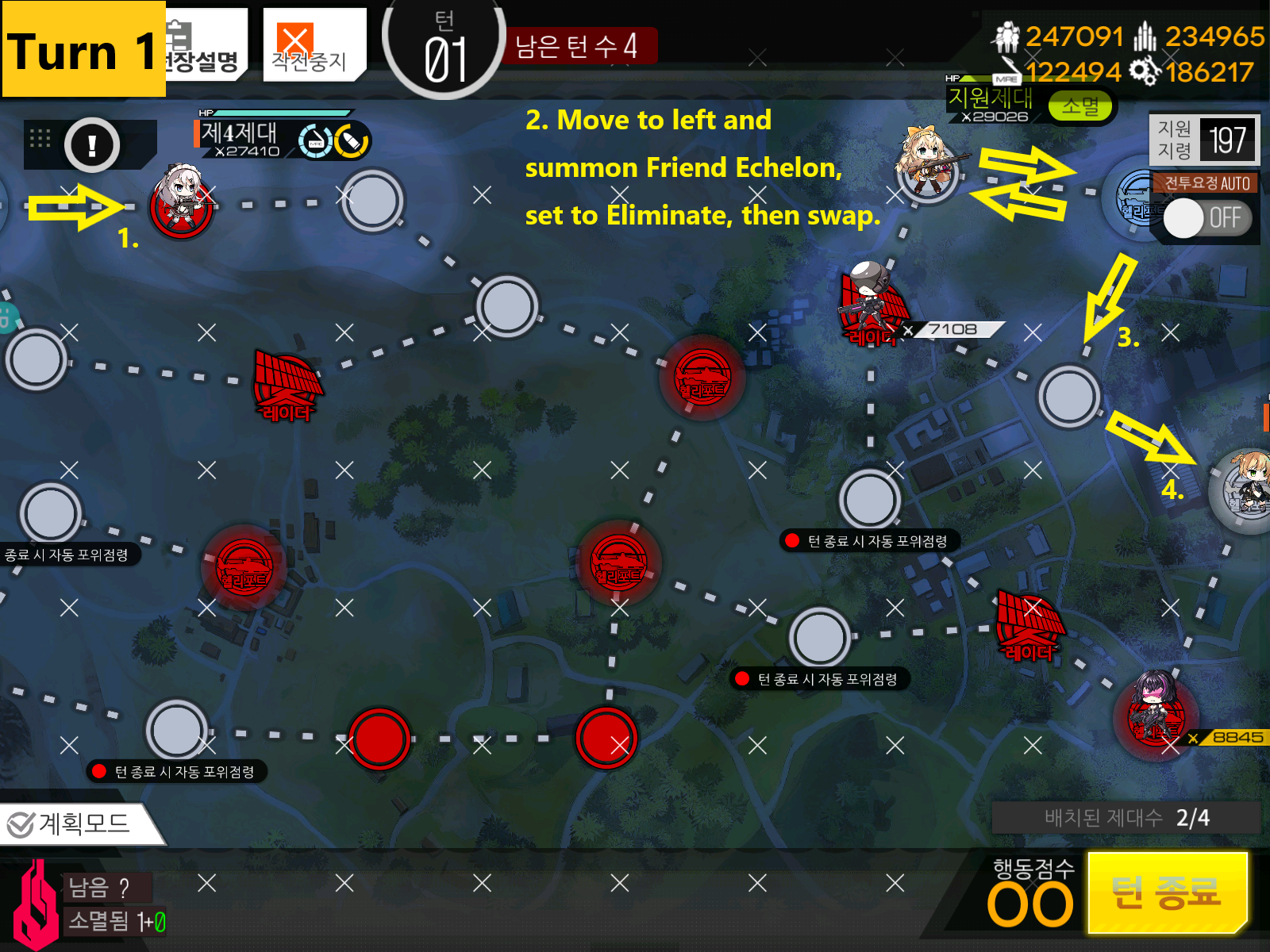 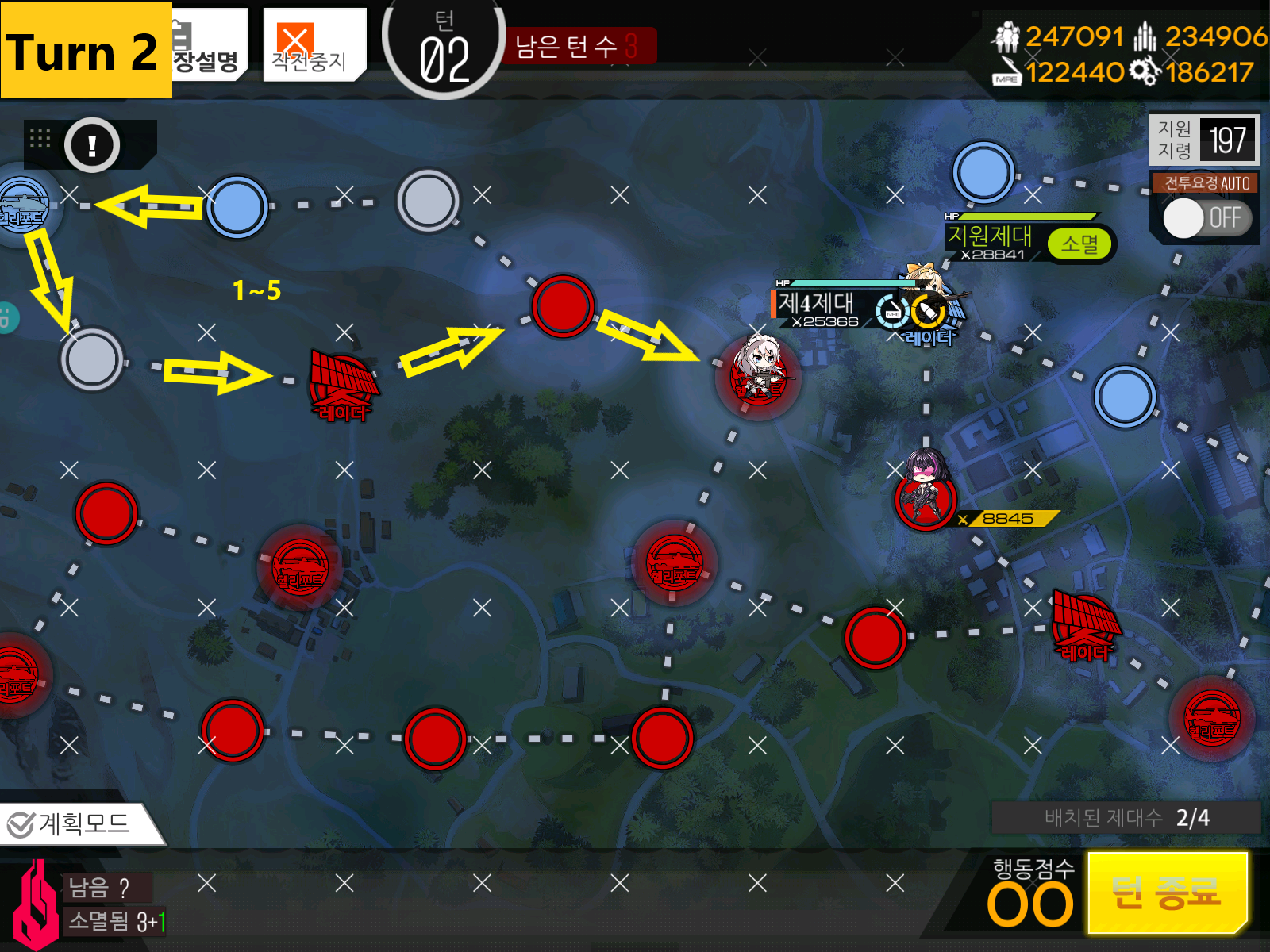 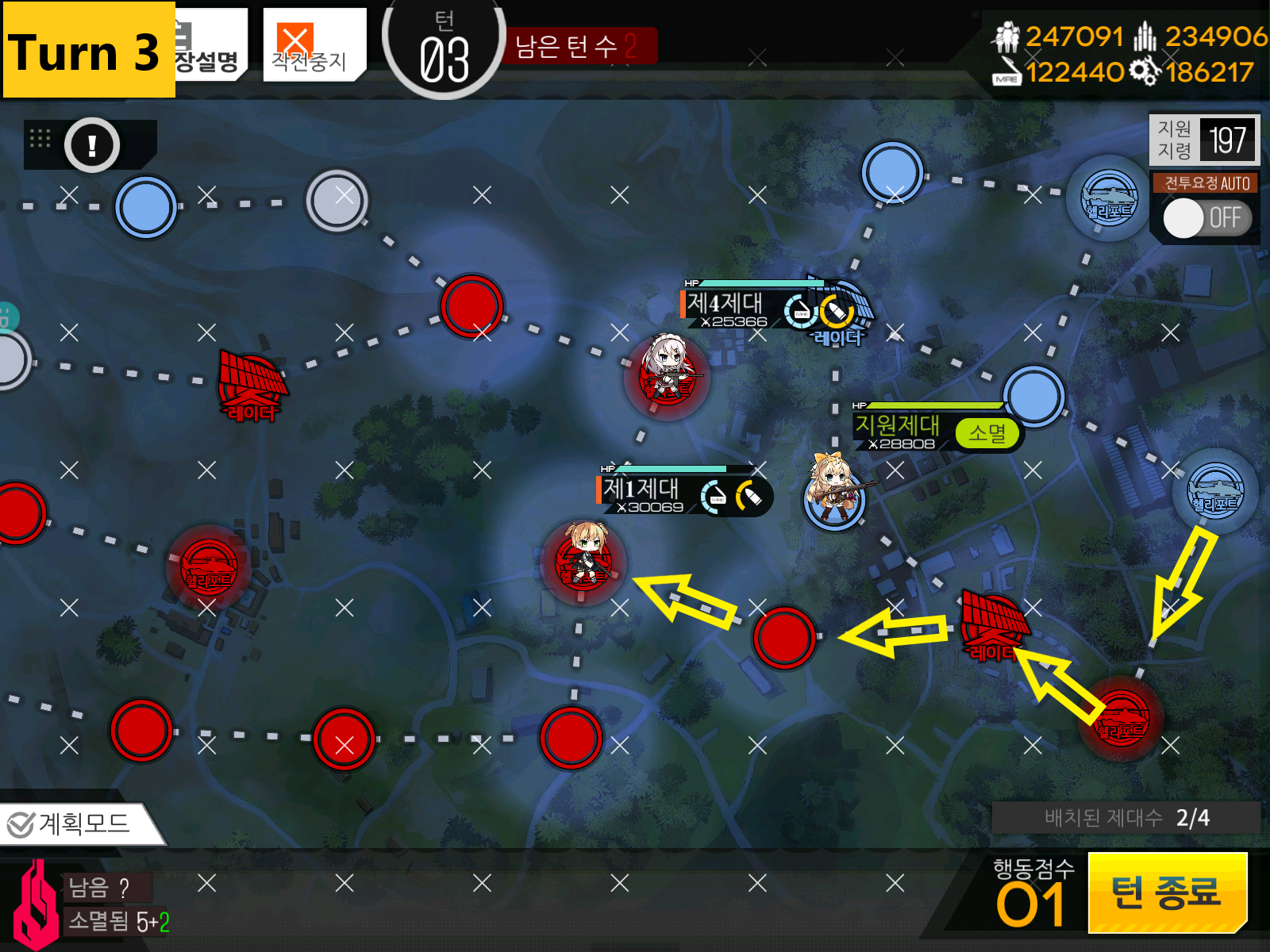 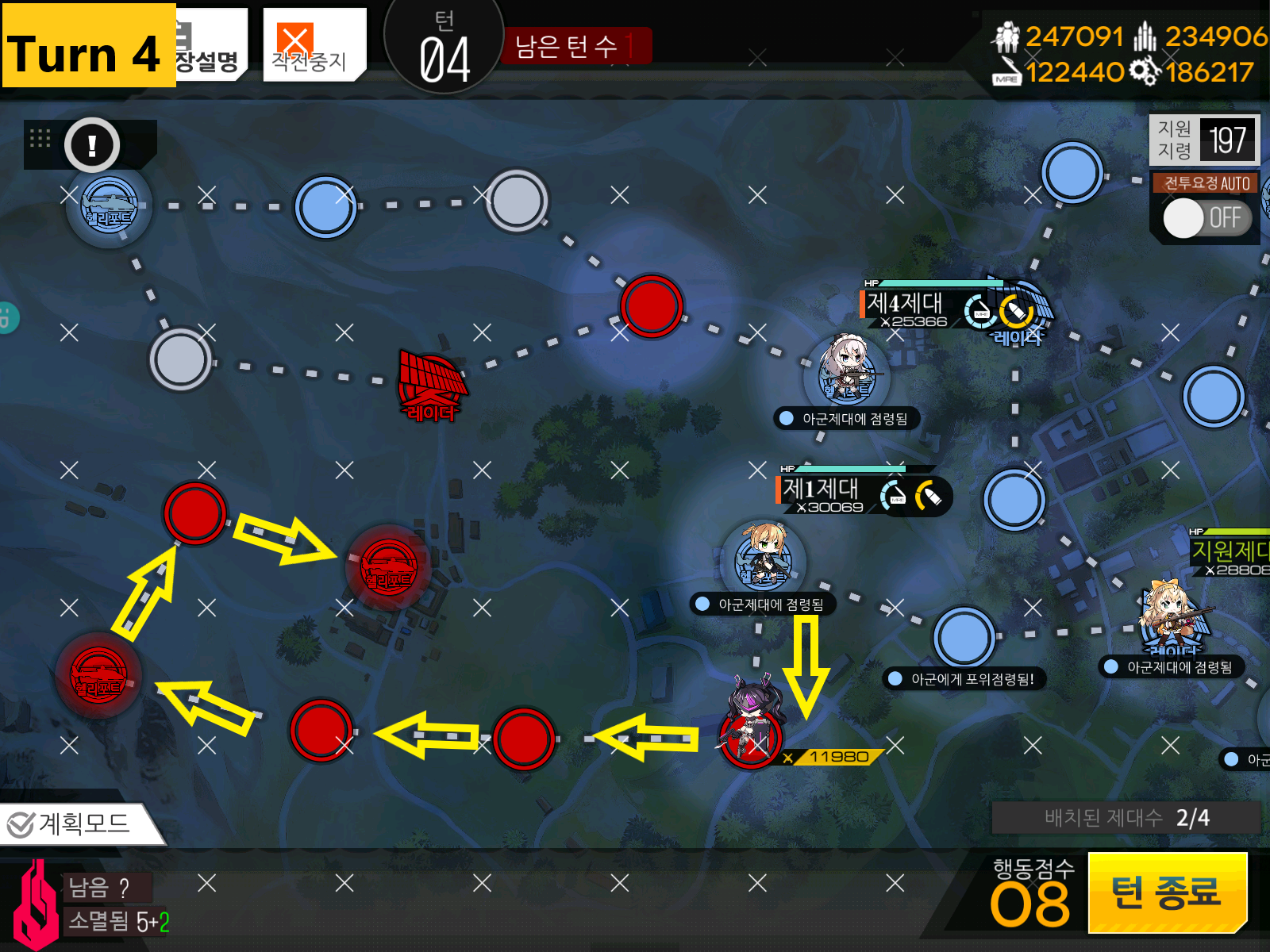 Okay, not too hard of the start. Make sure to kite and retreat to minimize the damage on SMGs. 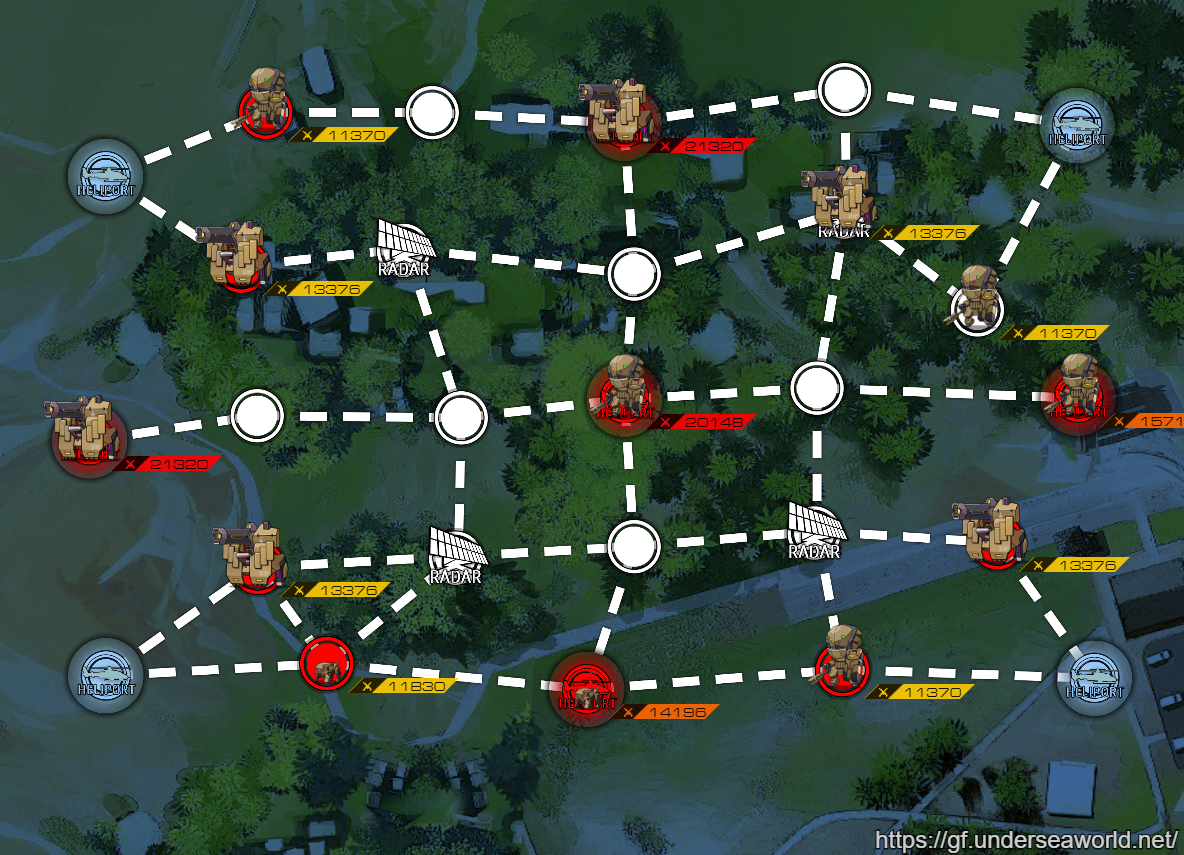 Map View. It’s all armor units in this map. Break out your MGs and RFs. It’s time. 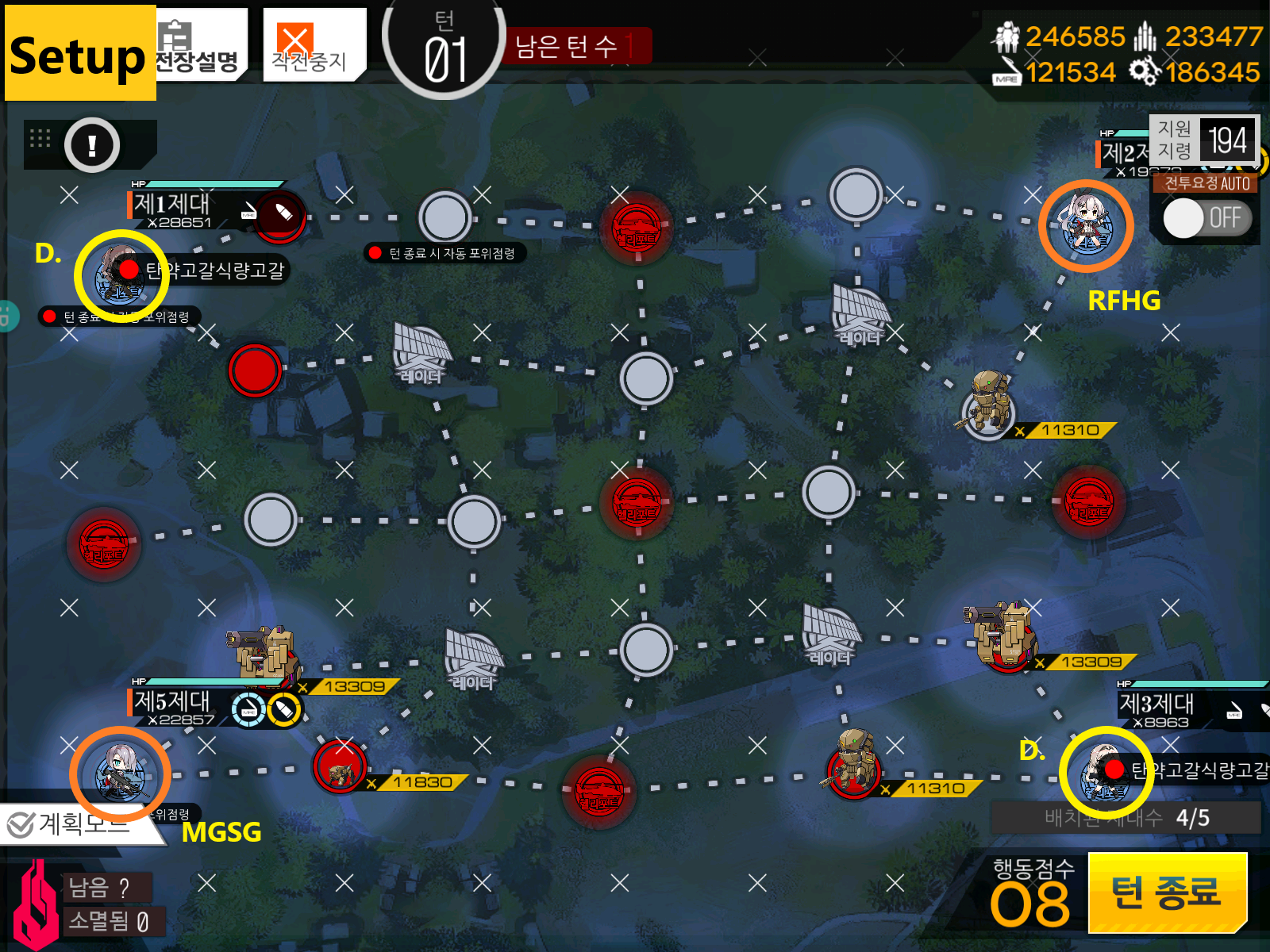 I have added photo of where echelons are set up. Because of armored Dinergates, MG echelons are better suited than RF echelons to handle the bottom side. You can try a mix of AR and MG echelons if you are lacking the T-dolls. 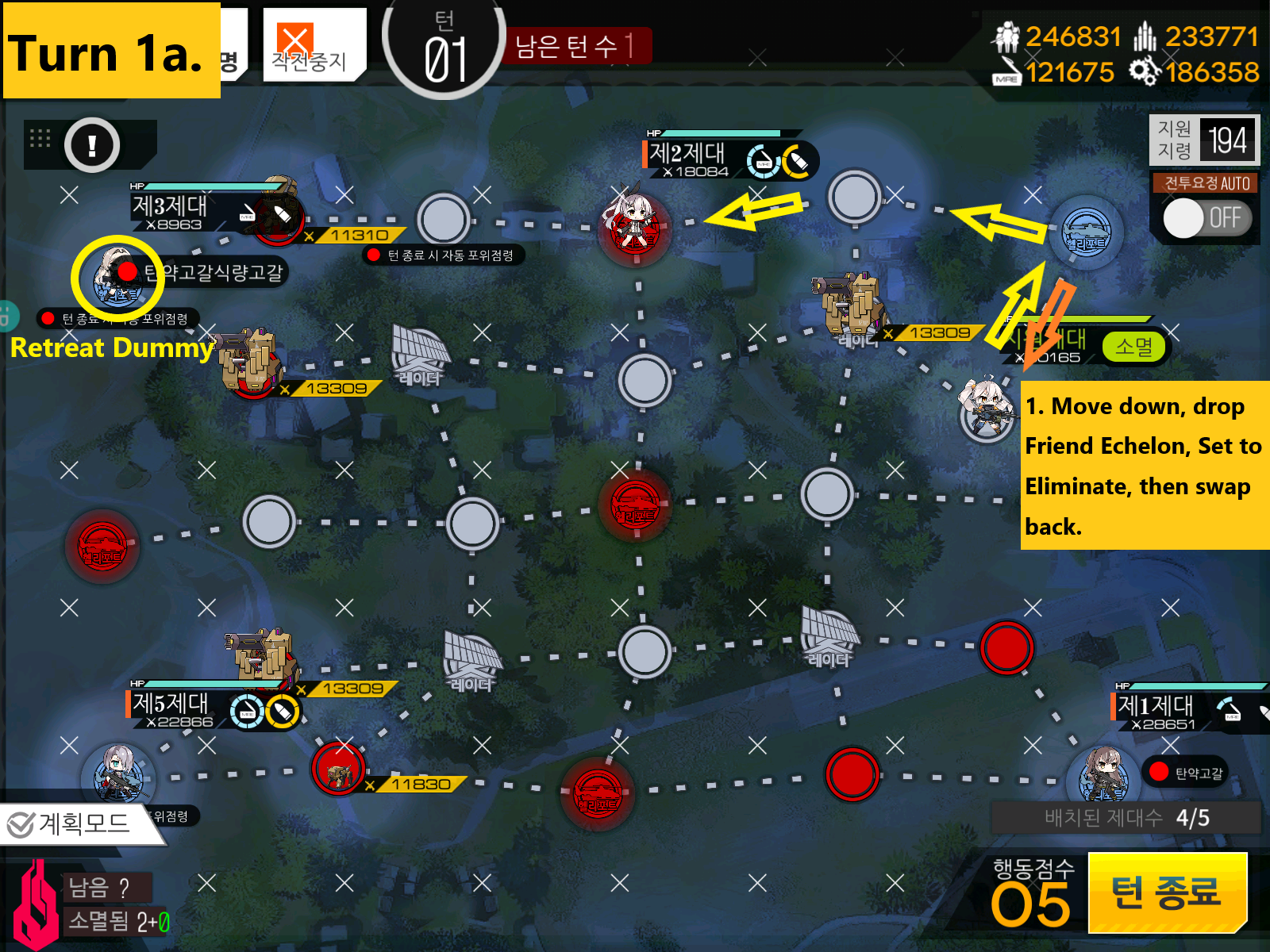 Because we only got 2 turns and there’s lot to be done, I have divided movements to top and bottom. Make sure to retreat the Dummy on the left top helipad before moving on to bottom side. 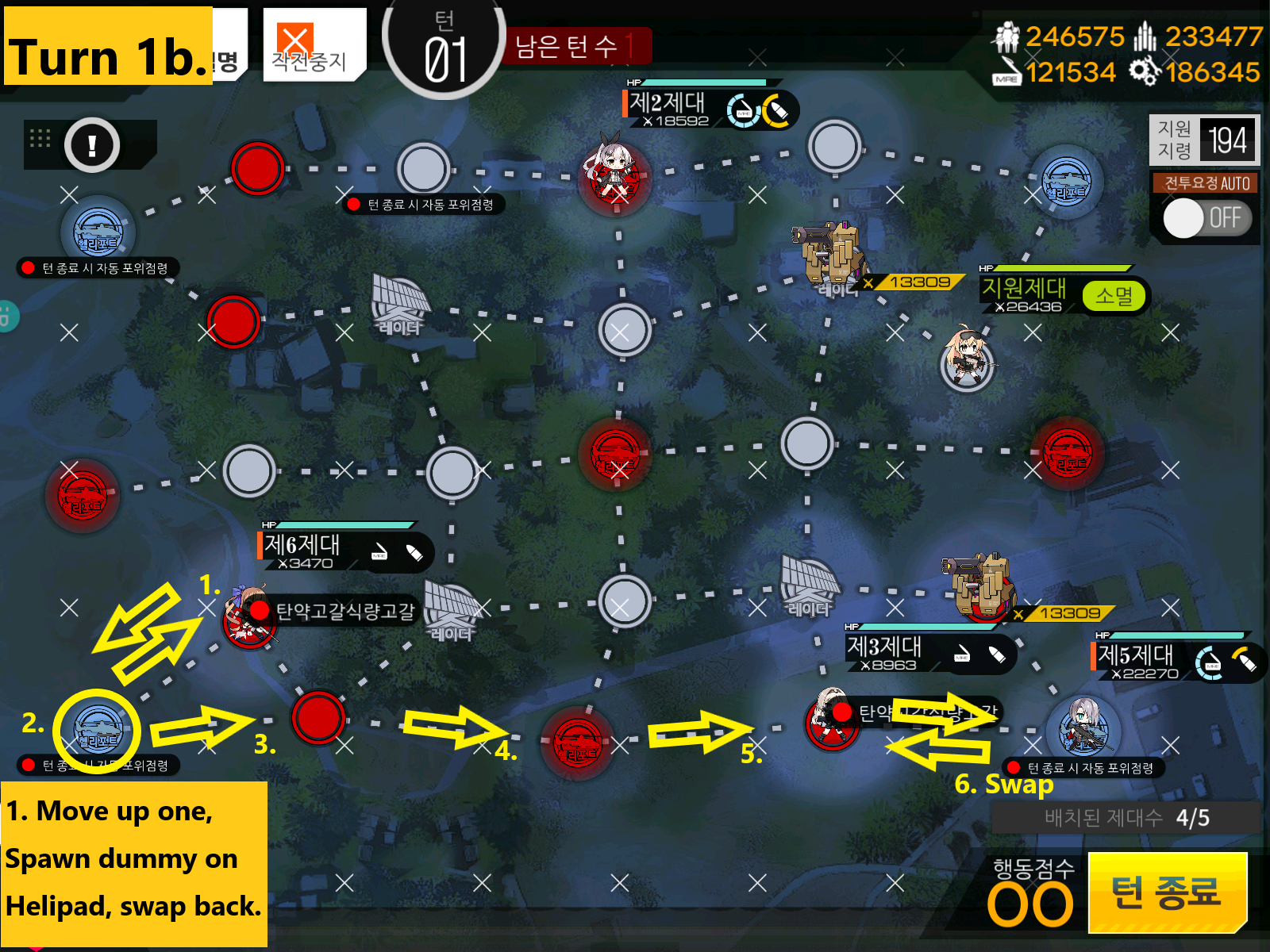 The reason we retreated Dummy and resummoned to the bottom is to make sure that helipad does not become taken in end of the turn by being surrounded. We will need all the movement points we get. Swap MG echelon to helipad at the end to defend it from potential run-in. 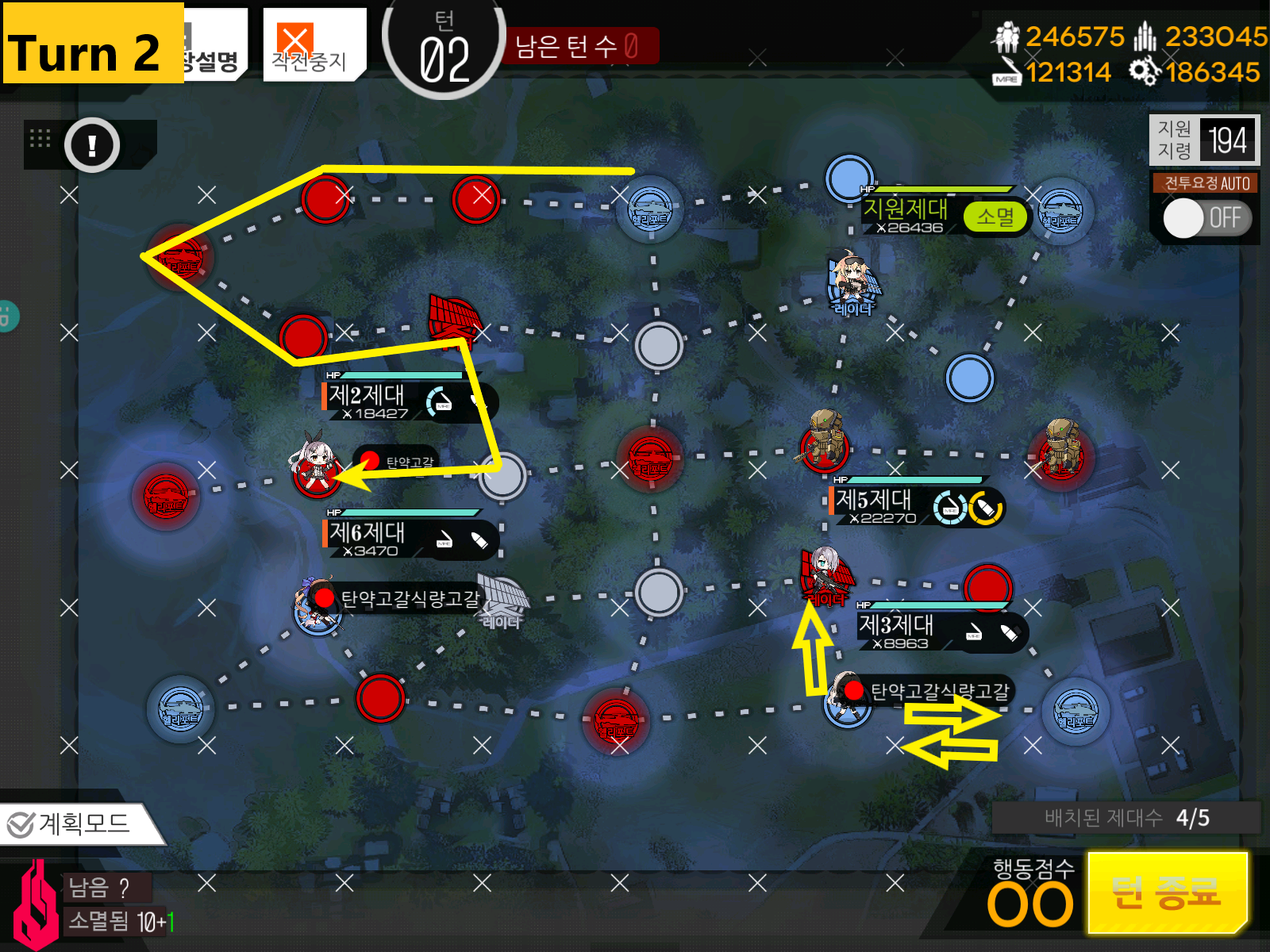 Depending on the movement of the enemy unit, last turn is different from attempt to attempt. One thing to note is that Friend Echelon should kill hopefully least 1 by end of the turn and in worst case scenario, you may have to end turn hoping that enemy units run into you instead of moving away to clear the mission. Map View. The Scouts at the very top are going to be a pain in the ass. Recommend AR SMG comp with good AOE skills. 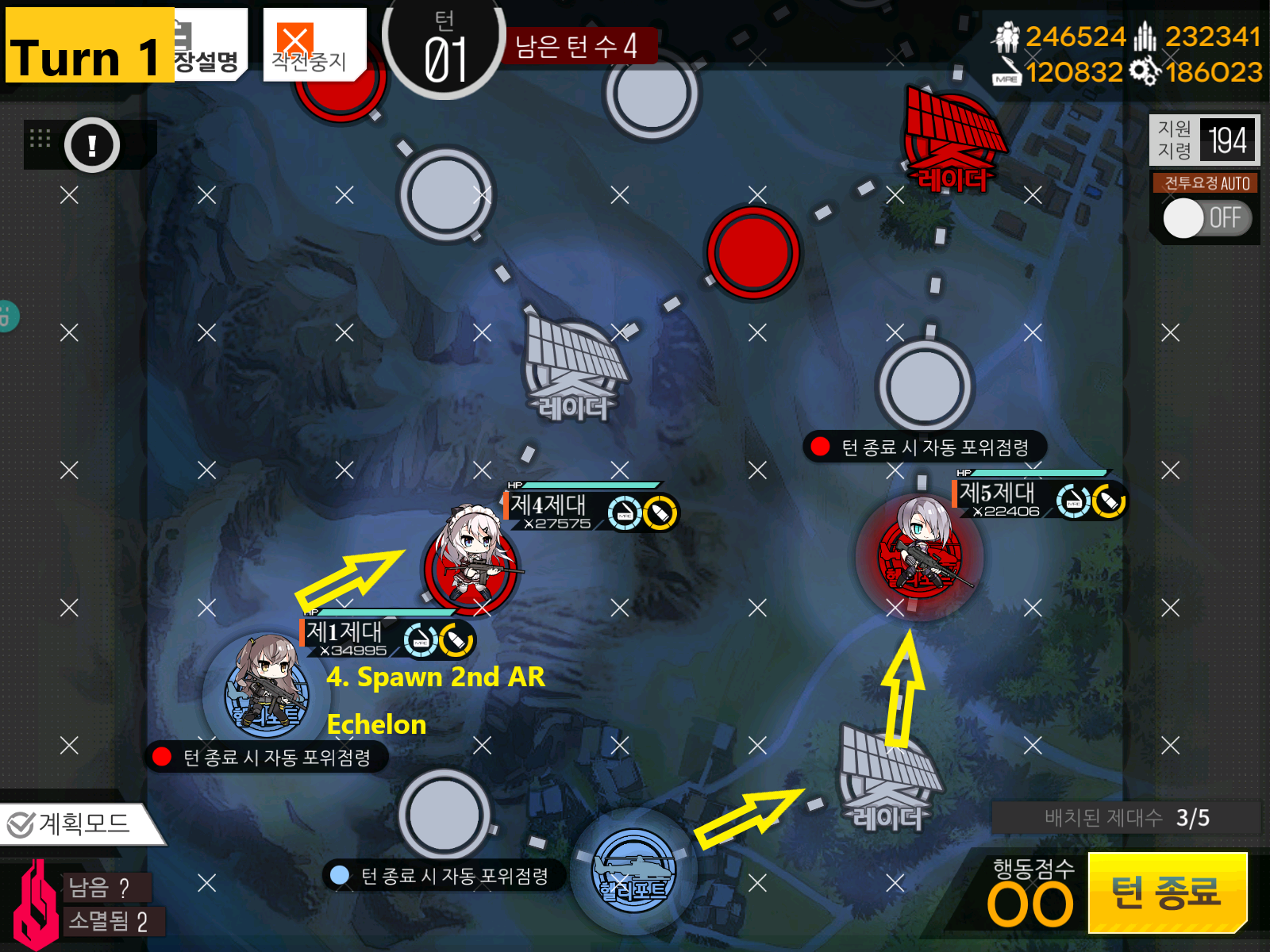 [I lost my footage… so here is the gist of the turn.] MG/AR echelon stay put while 2 AR Echelons on the left expand up north. 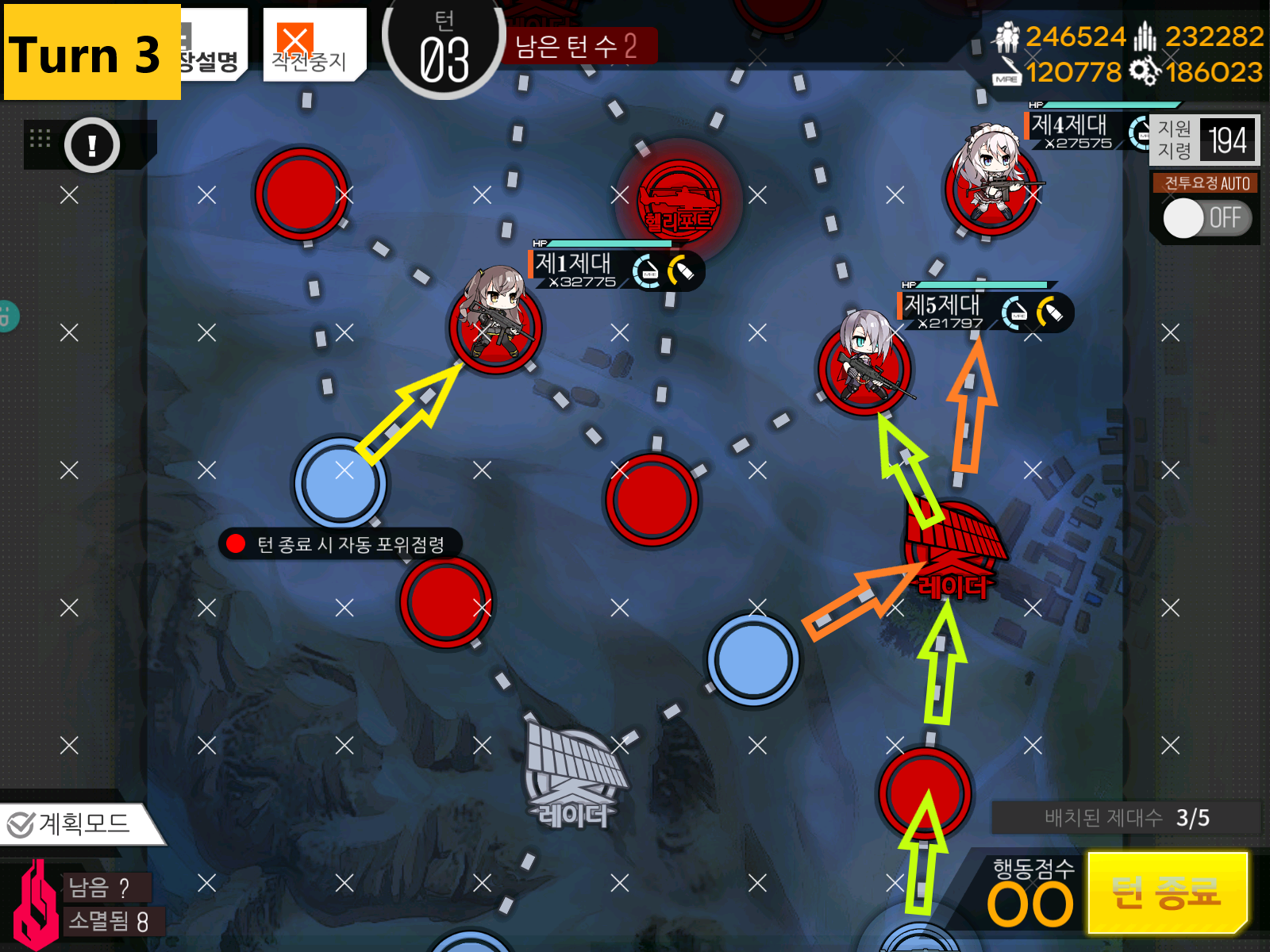 I have color coordinated the echelons to make it easier to understand the movements. If there’s an enemy unit in the Radar intersection, use MG Echelon to maintain HP on SMGs for Scout fight ahead. 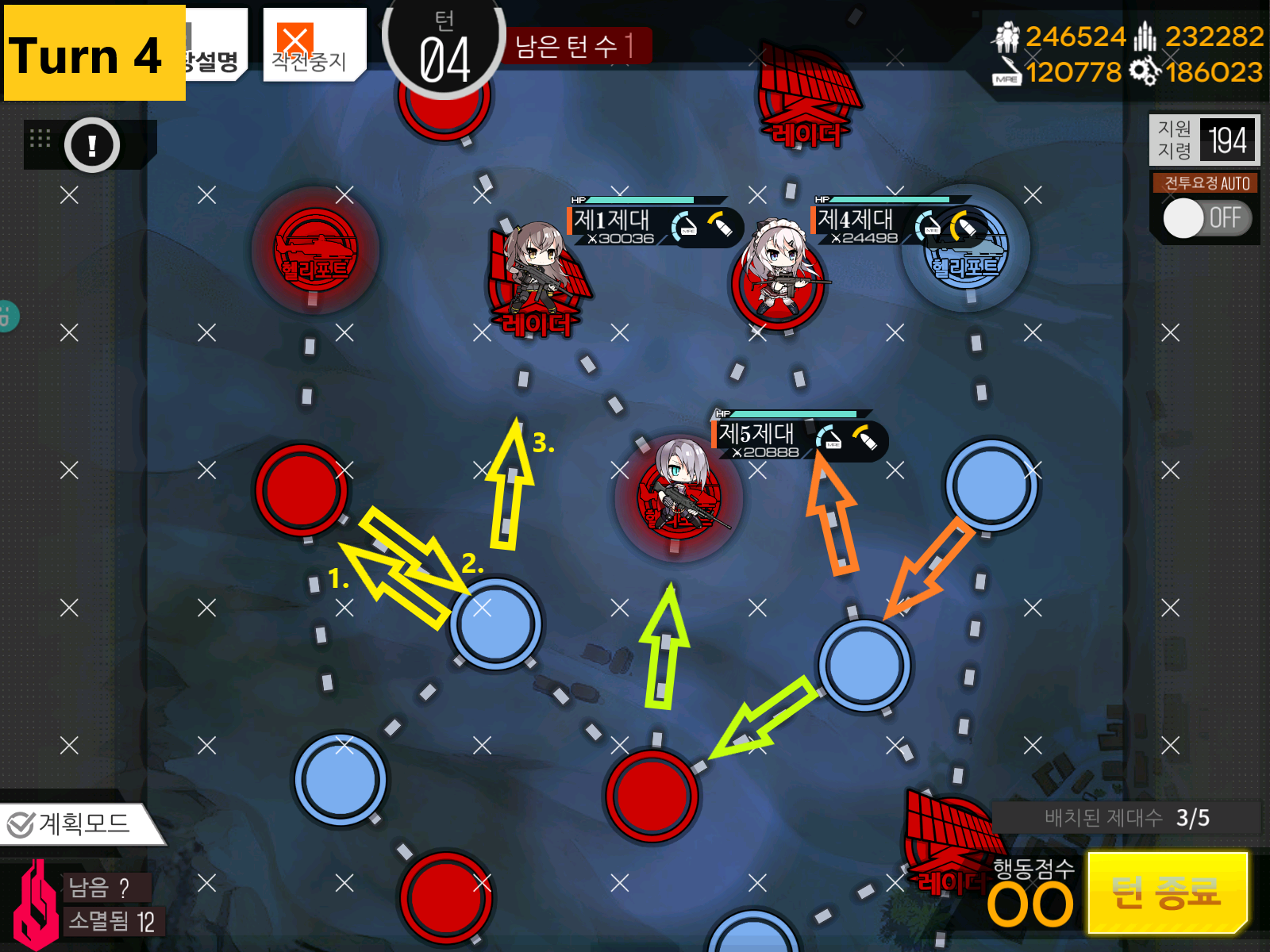 I have yet to see any enemy units on the left helipad but it’s better safe than sorry. Check to make sure the enemy is not there then proceed up to decrease the area that needs to be covered on the last turn. 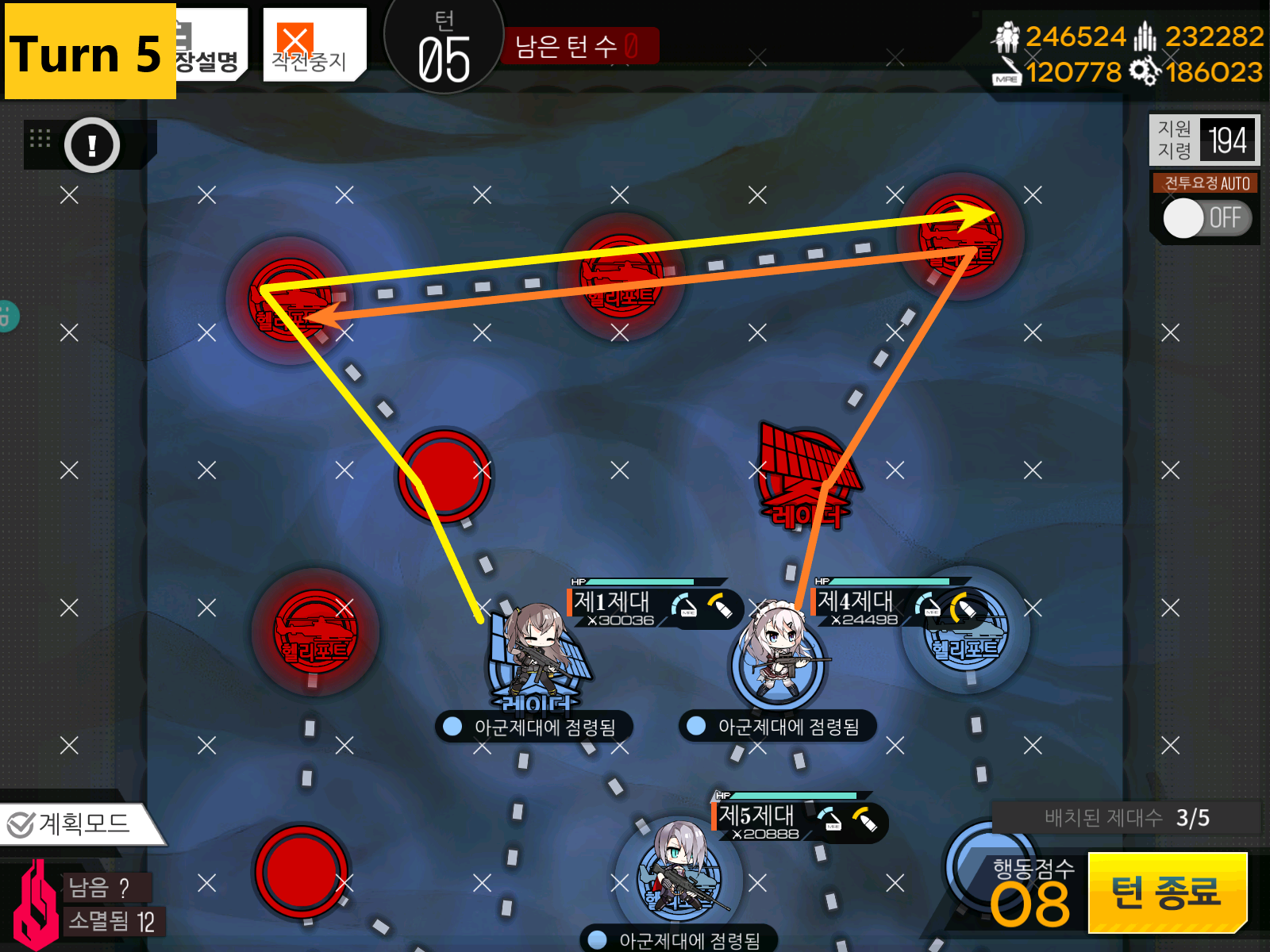 At this point there should be one or two scout units left. Again use echelon that has more HP to minimize potential accidents. Map View. There are TWO Manticore units with 4 of them in each unit. Map is all armor units so I recommend strongly to use MG Echelons to clear out the non elite units if you are looking to save on Manpower and Parts for repair. Nemeum with 19,558 CE rating is the one you should be most careful with as it will shred frontline if you are second too late on click on retreat or kiting. Kiting by retreating is most effective way to buy time against them.
*** UPDATE ***
Now instead of using a 2nd MGSG echelon on the top you can use the ARSMG + HG Echelon to take on the Manticore relatively safely while saving up on resources. 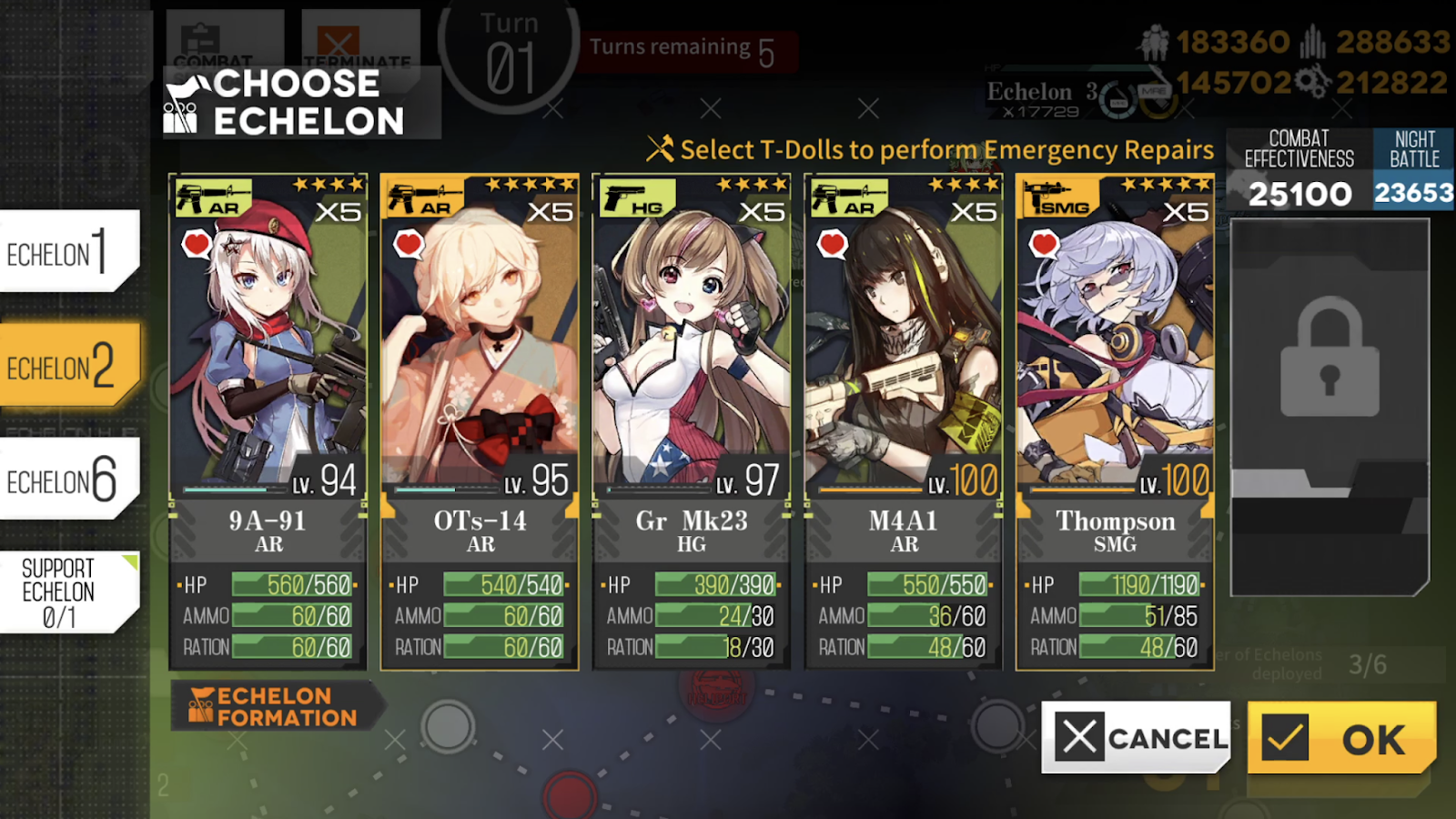 Here is my set up for the replacement Echelon to 2nd MGSG echelon I was using originally. It can reliably kill Manticore units but I suggest you avoid other units if you can if kiting is an issue for you. 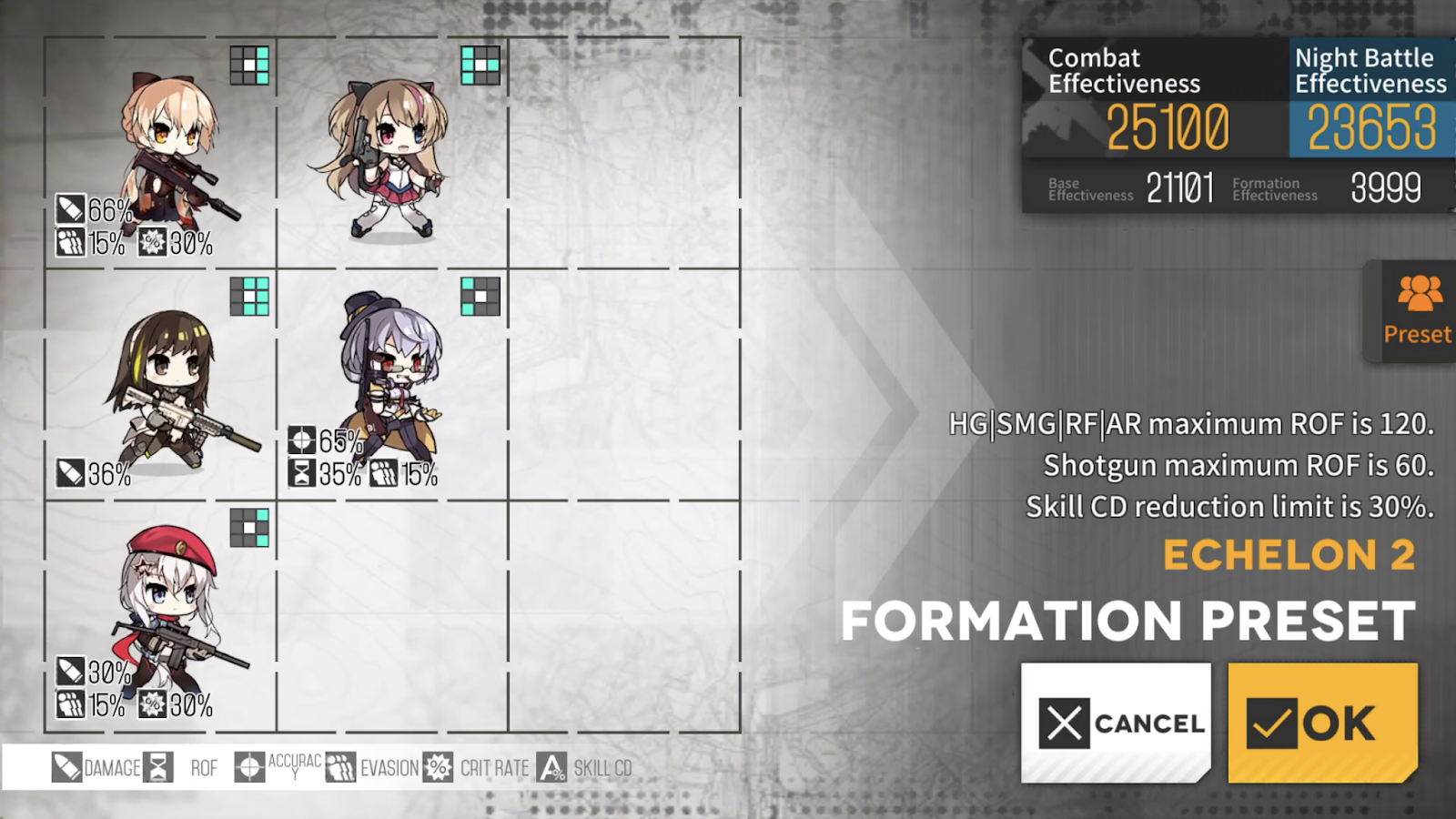 I set up this way but MK23 can be in the 5 position if you are comfortable switching when battle starts. 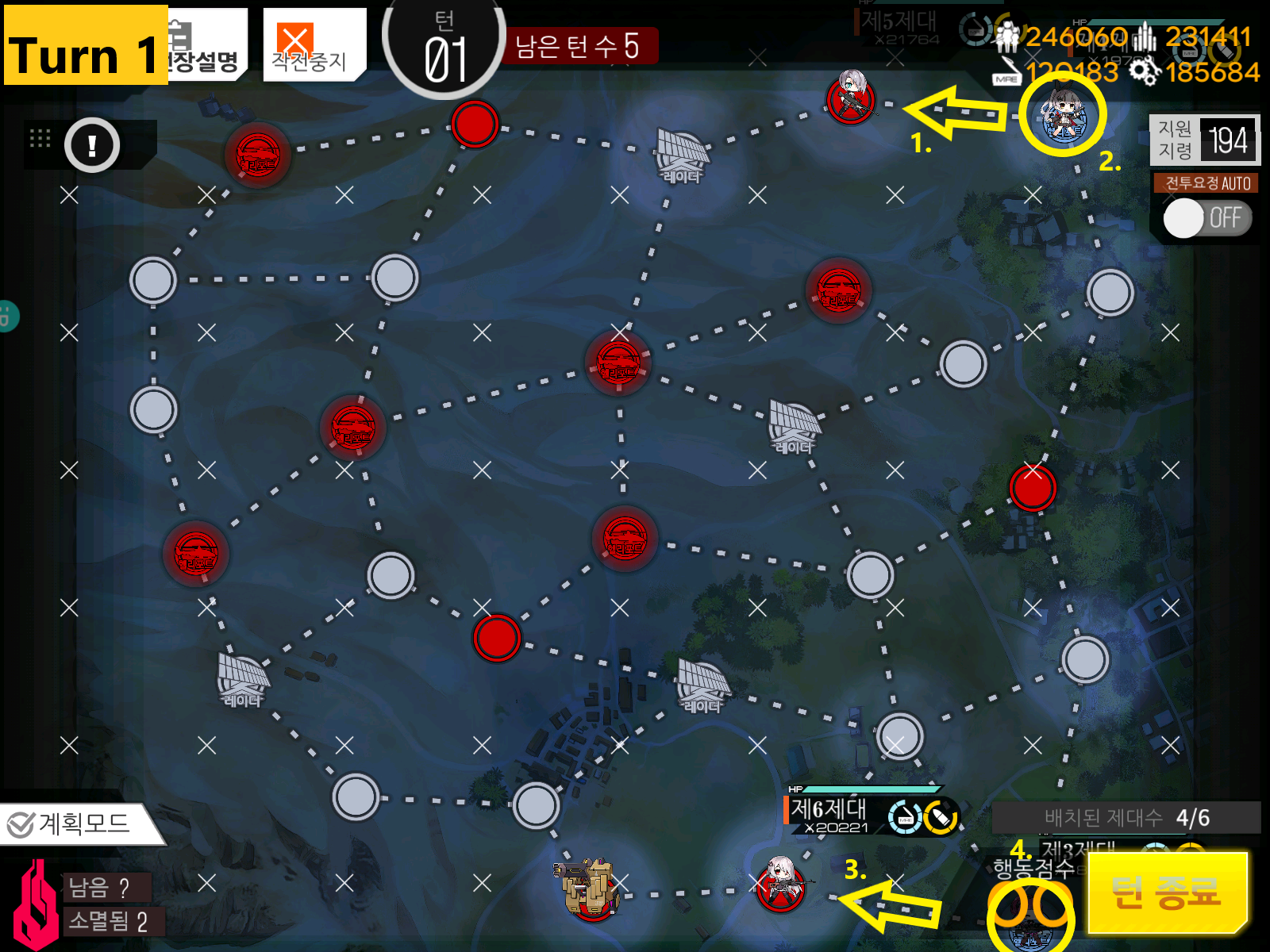 Start with 2 MG/ARMG echelon on each helipad. Move one to left and spawn RFHG Echelon that will fight Manticore. 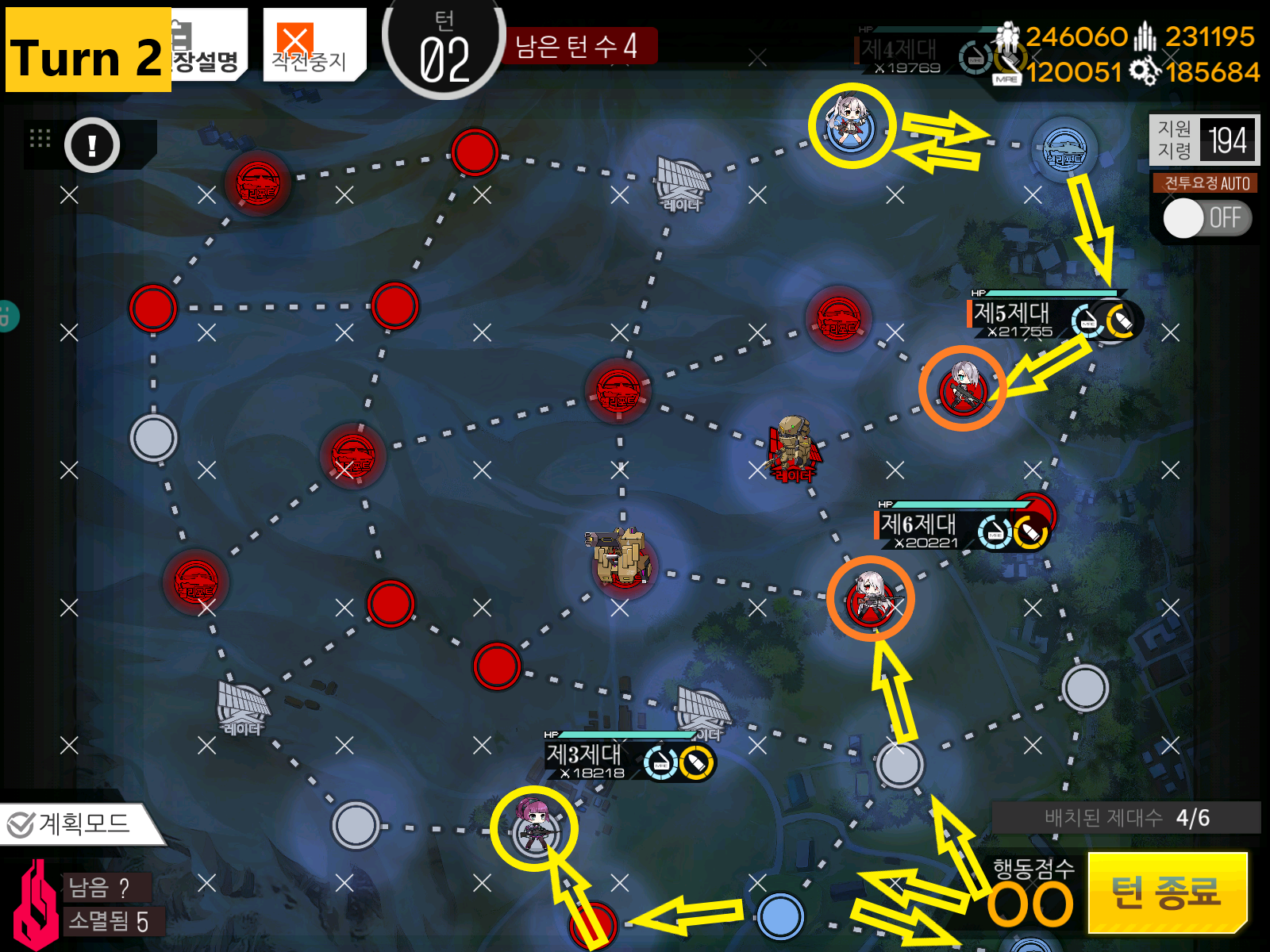 I Swapped MG with RF echelon and sent them to center where Tarantula and high CE armor units are chilling in the center. Retreat SG units against Nemeum to prevent damage while MGs do the work. 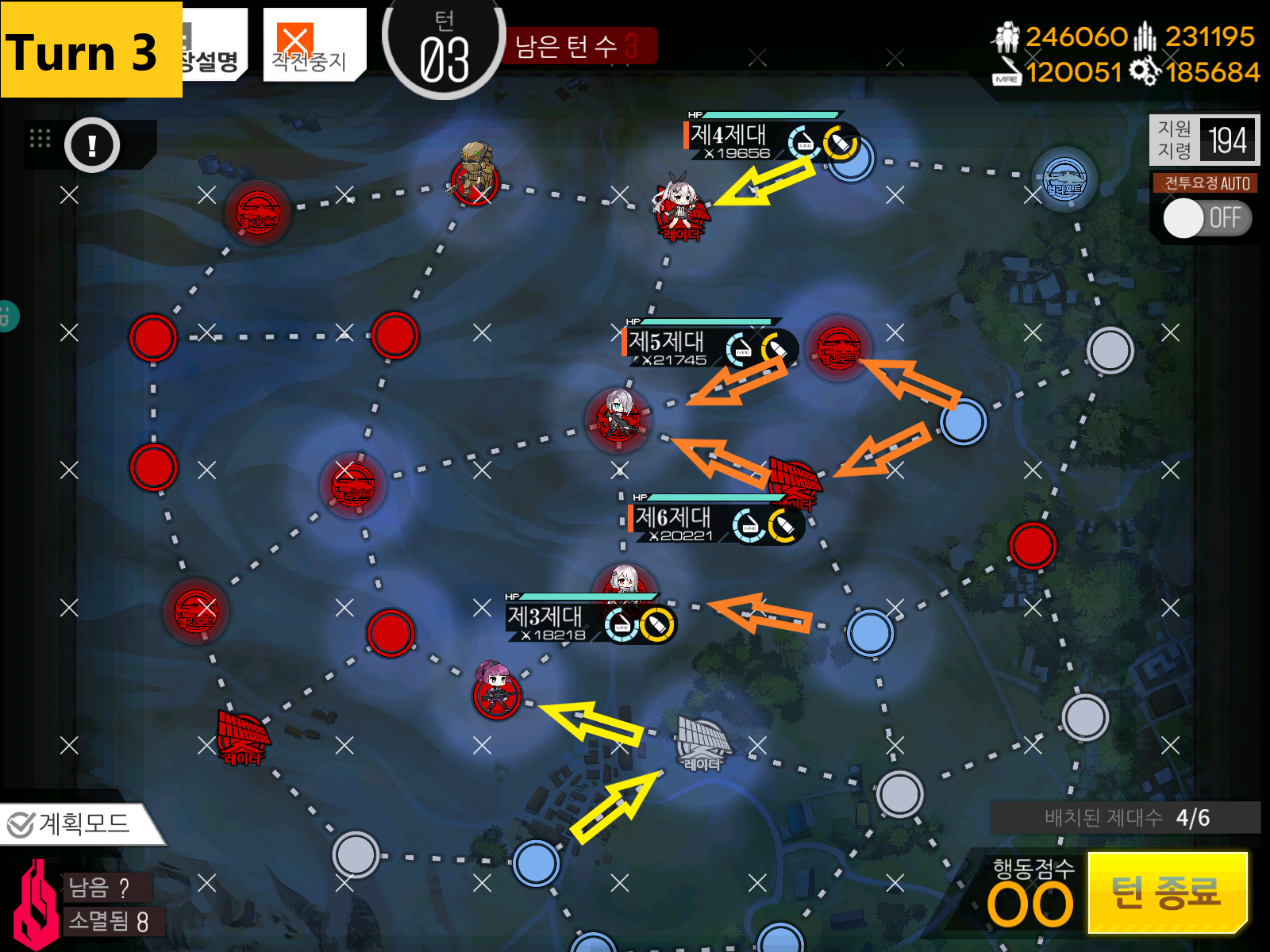 Advance the line you have formed across the map. Kill non-elite units and continue to light up more area. Make sure that RFHG echelons are not in danger from Tarantula unit.

I recommend RFHG Echelon for each Manticore because it is relatively hard to kill and your echelon will likely to sustain heavy damage after the battle. With good kiting and repositioning, it can be done with just 1 RF HG, but expect heavy casualties.
*** UPDATE ***
RFHG echelons can be ‘reinforced’ via Shield tank SMGs or high Evasion SMGs by replacing one of HG in the Echelon to increase its survivability. This is recommended when you are limtied on your Echelon numbers and 2 Manticore fights are needed by 1 echelon. However if that is the case, I would recommend ARSMG + HG set up strongly.
————————————————————————————————————————-
1RF + 1 ARHG + 1 Friend + 1 Dummy Method
***
Since this method reduces number of movement points available, variation of enemy position as turn progresses will increase. I’m showing what I was able to do with given setup, not what the definitive guide is with following setup.
*** 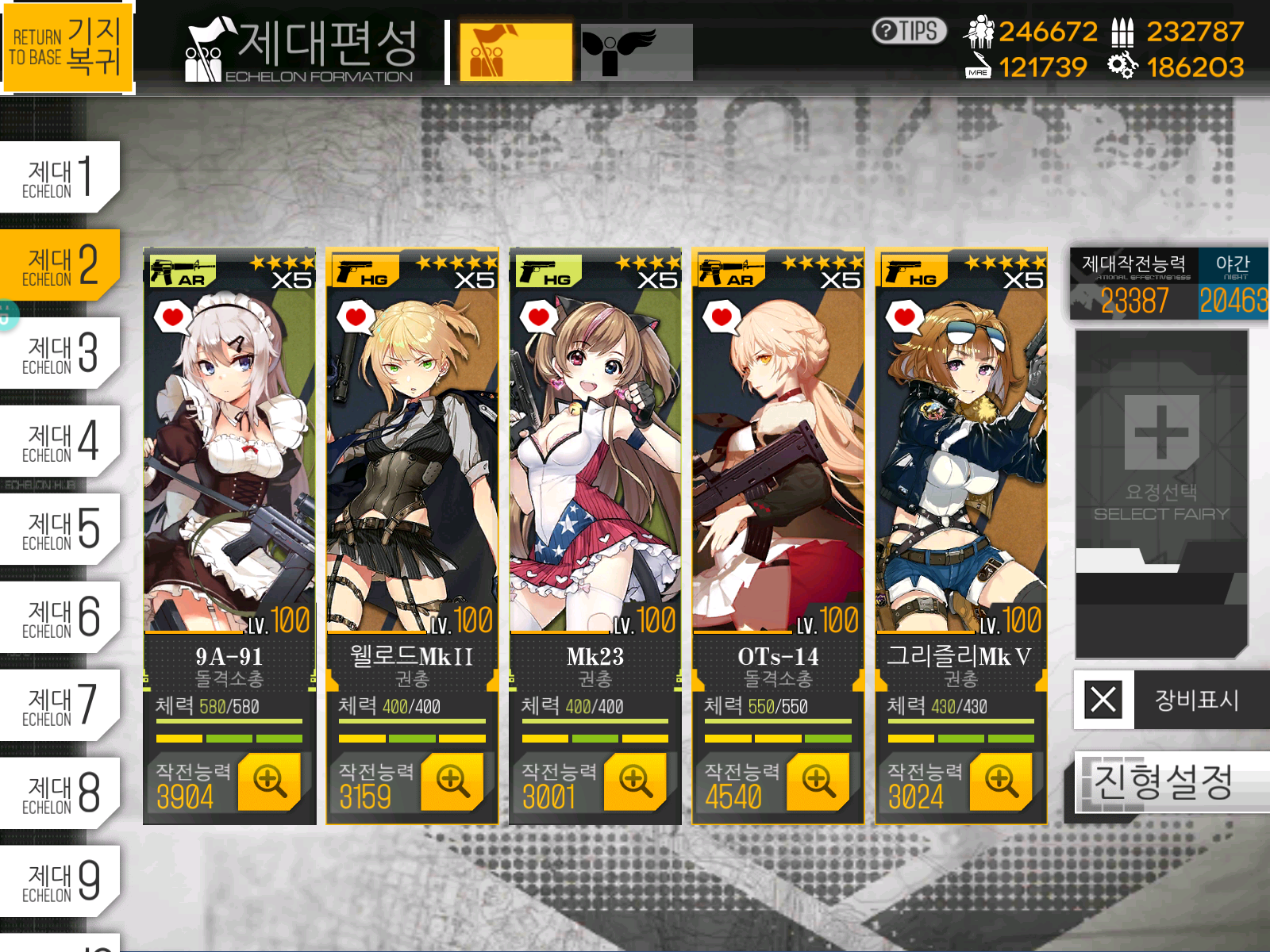 Echelon 1 is set up to fight with Tarantula unit once and be done after killing few units. Kite or die. Mixing in a MG in the echelon can increase its longevity. 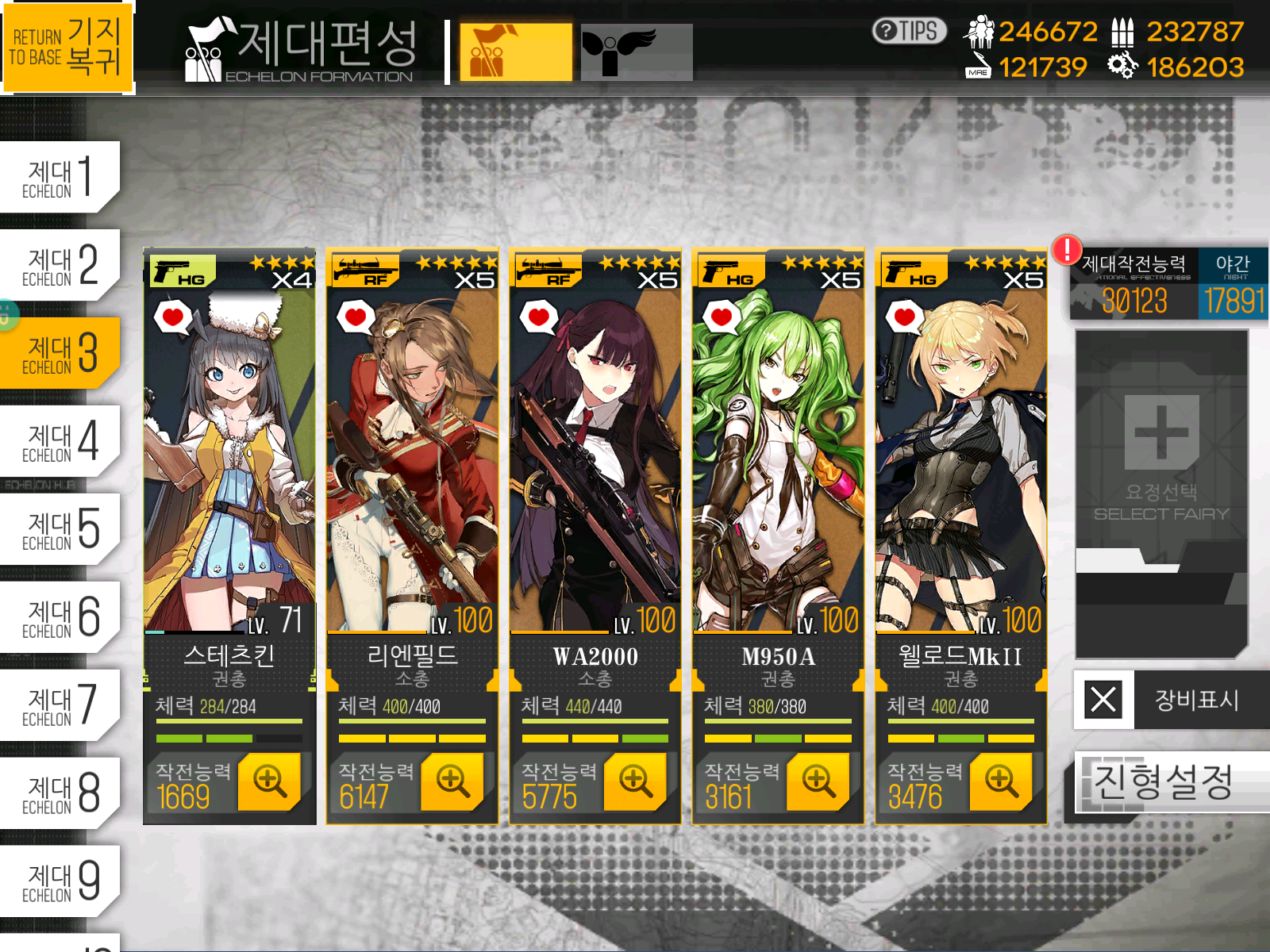 Echelon 2 will be fighting everything but Tarantula and Manticores. With good kiting and retreating, you can do it with some heavy damage but not dying and losing affection. 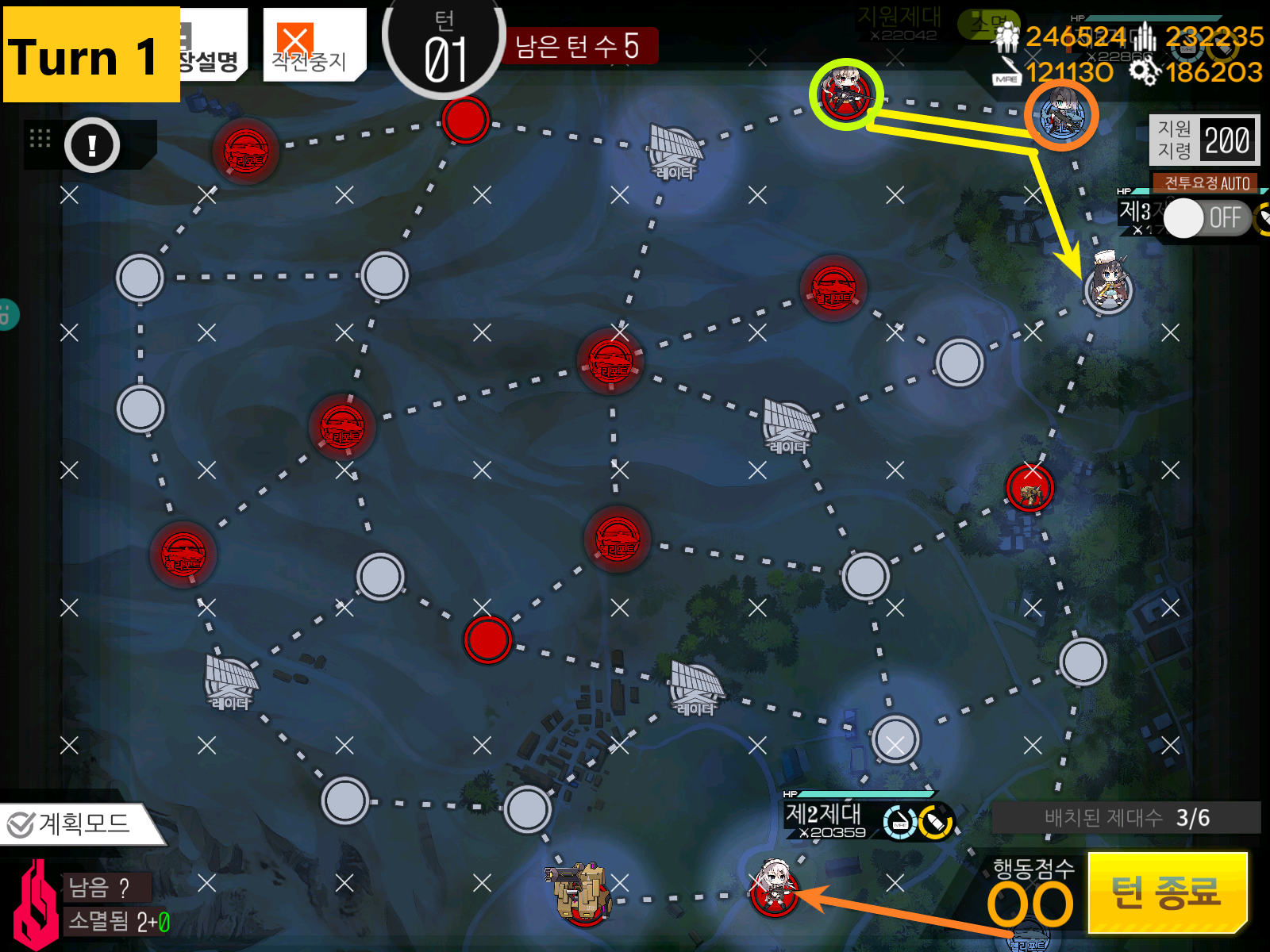 Move RFHG echelon to left, spawn Friend Echelon that can handle armor units, set to eliminate and swap back. Move one down and spawn a Dummy. This Dummy can be a MG Echelon that can effectively save lot of time if you can get it to run into Tarantula you see in the center right of the map. If not, kiting is your only friend.

If Tarantula unit is your main concern, deviate from this guide by placing Friend Echelon to south of the Helipad and let it take care of the center.

ARHG unit’s movement is in orange, Friend Echelon in green, and RFHG echelon in Yellow. 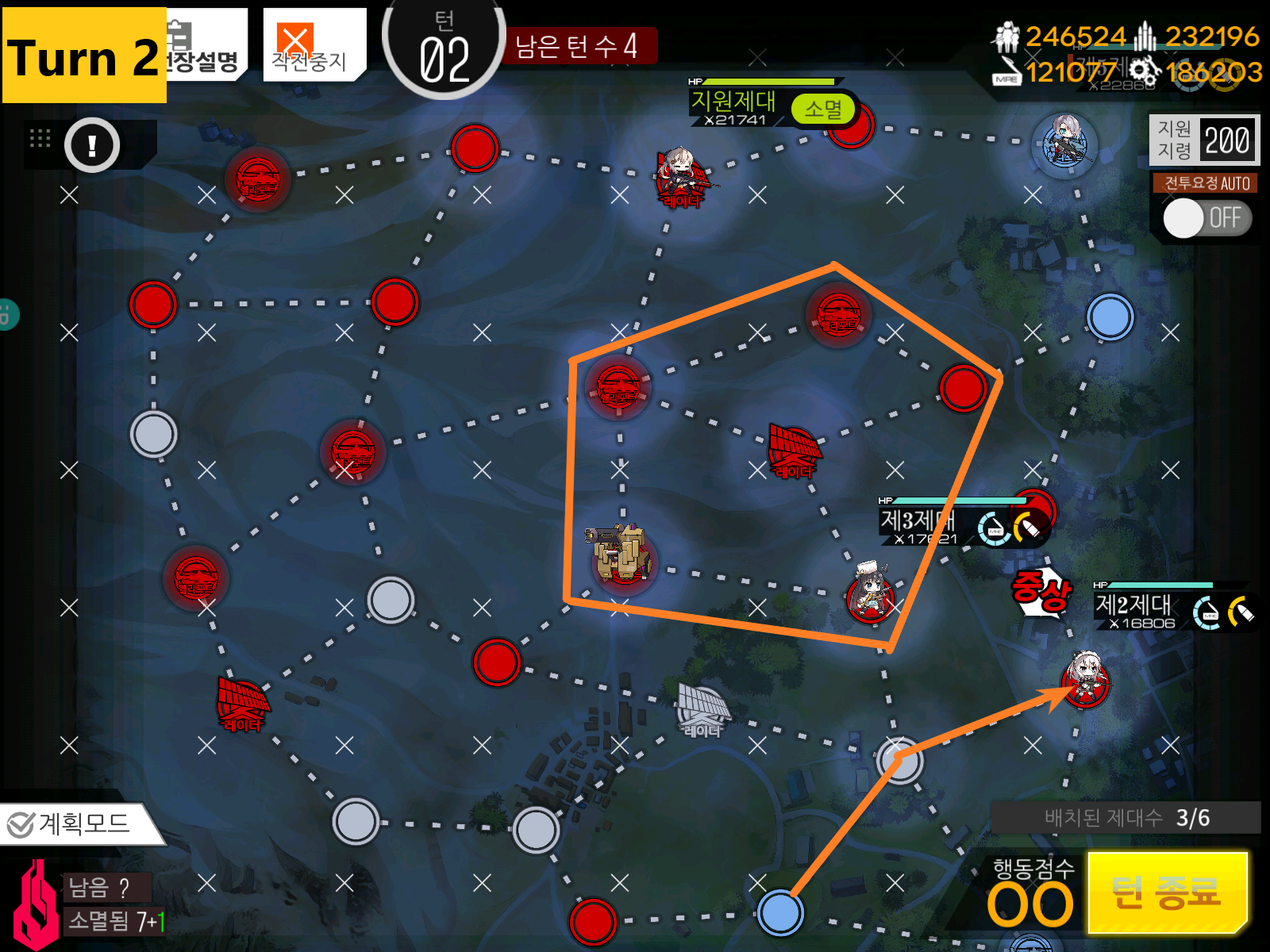 This is where you have to free move to clear out the highlighted area. In my case, Tarantula escaped so I was forced to use ARHG echelon early to take out the unit. Keep in mind there is one more on the left side. 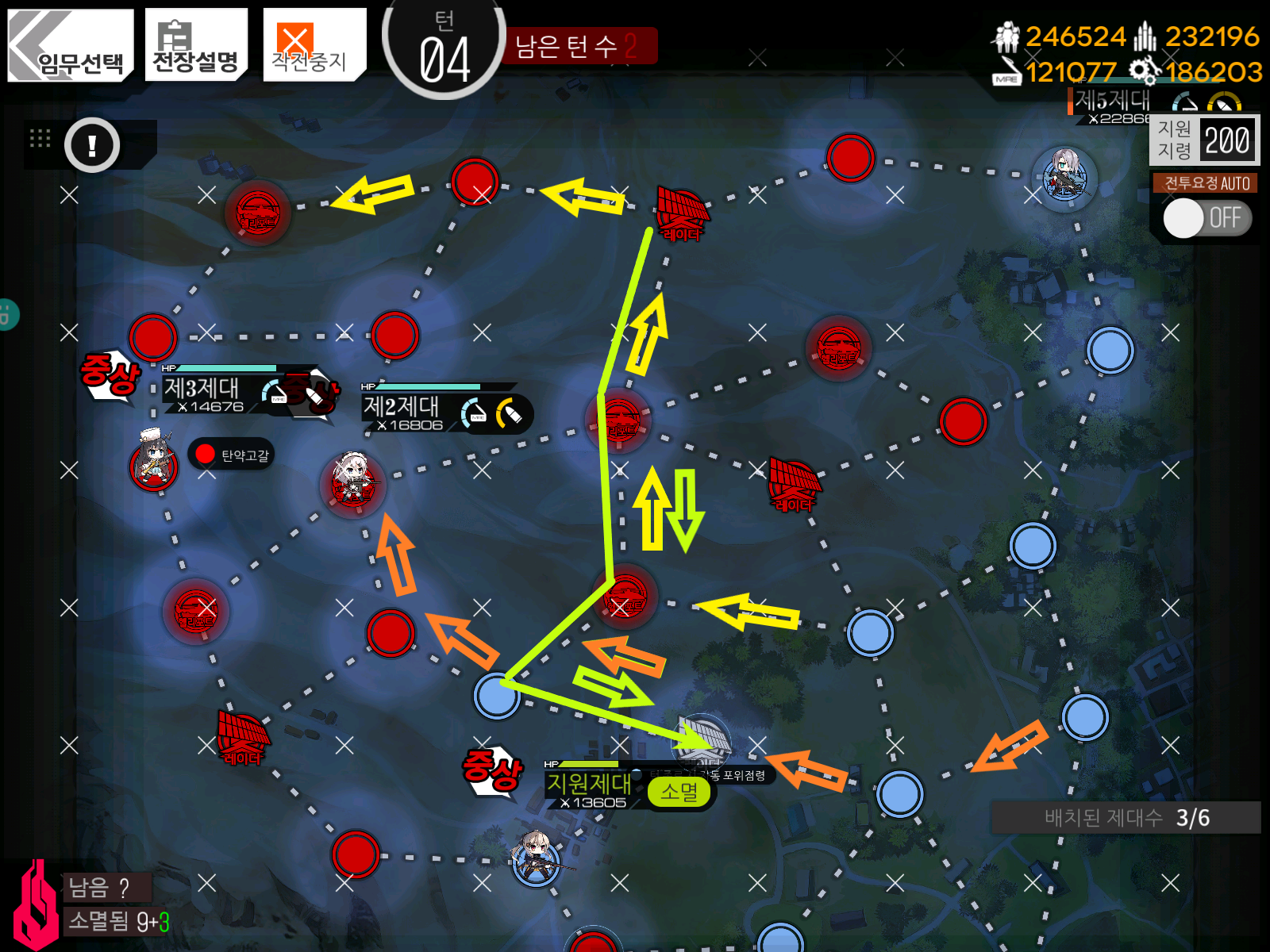 For next 2 Turns I moved around the Friend Unit via Swapping to have it run into the last Tarantula Unit and fought 2 manticore unit with my RFHG echelon. As you can see in the bottom i have killed 12 units total, beating the map. ARHG unit’s movement is in orange, Friend Echelon in green, and RFHG echelon in Yellow.