Ranking Guide for AW (Made By Maki)

Hi I’m Makisu, me like cute gun girl desu AYAYA, scored topped at 183.8k at the time of writing, hopefully it makes the guide a bit more legit.

Minimal requirement 6 Echelons if you are trying for top 100.
Most being [ARSMG], and fit in as many [SGMG] as possible.

As [SGMG] teams are costly and time consuming to raise, while [SMGAR] having a lot of options, most players find themselves with multiple [SMGAR] teams, and fewer [SGMG] teams.

Another factor affecting the number of echelons required are the mob spawn locations, as you will need to kill as many mobs without clogging, while having enough ammo/ration before the helipads reopen for you to resupply.

Factoring these into the equation, I recommend having 6 functional echelons before attempting ranked.

The echelons should be assembled with the following in mind:

[ARSMG] teams are the go-to that fulfills the guideline (1.), they can take down bosses easily without sustaining heavy damage while still being able to deal with most, if not all encounters.

As guideline (2.), [SGMG] teams’ superior firepower and tankiness makes them extremely powerful in AW ranking, since they can deal with almost every single mob spawn without losing 20~ health on your SG. If you are looking to afk your clears or just to make the run easier without having to micro, fit in as many [SGMG] teams as possible. Note that they are weak against bosses, so try to not run them into bosses unless necessary.

If you have more than 6 echelons, Adding in [HGRF] teams are fine too as they excel in dealing with armored units and bosses, while being weak against tarantulas and dragoons. If you field [HGRF] teams, make sure to leave a buffer zone between [HGRF] teams and the spawn so you can swap in other teams if tarantula spawns.

Feel free to sub a HG in [SMGAR] teams to replace the AR in the middle (Position 4, refer to numpad), preferably firepower buffers to handle armored units.

If you have a few extra MG laying around, but not enough to make another team, I recommend  using [2SMG 2AR 1MG] teams, as they are extremely flexible and should deal with everything including bosses with ease. 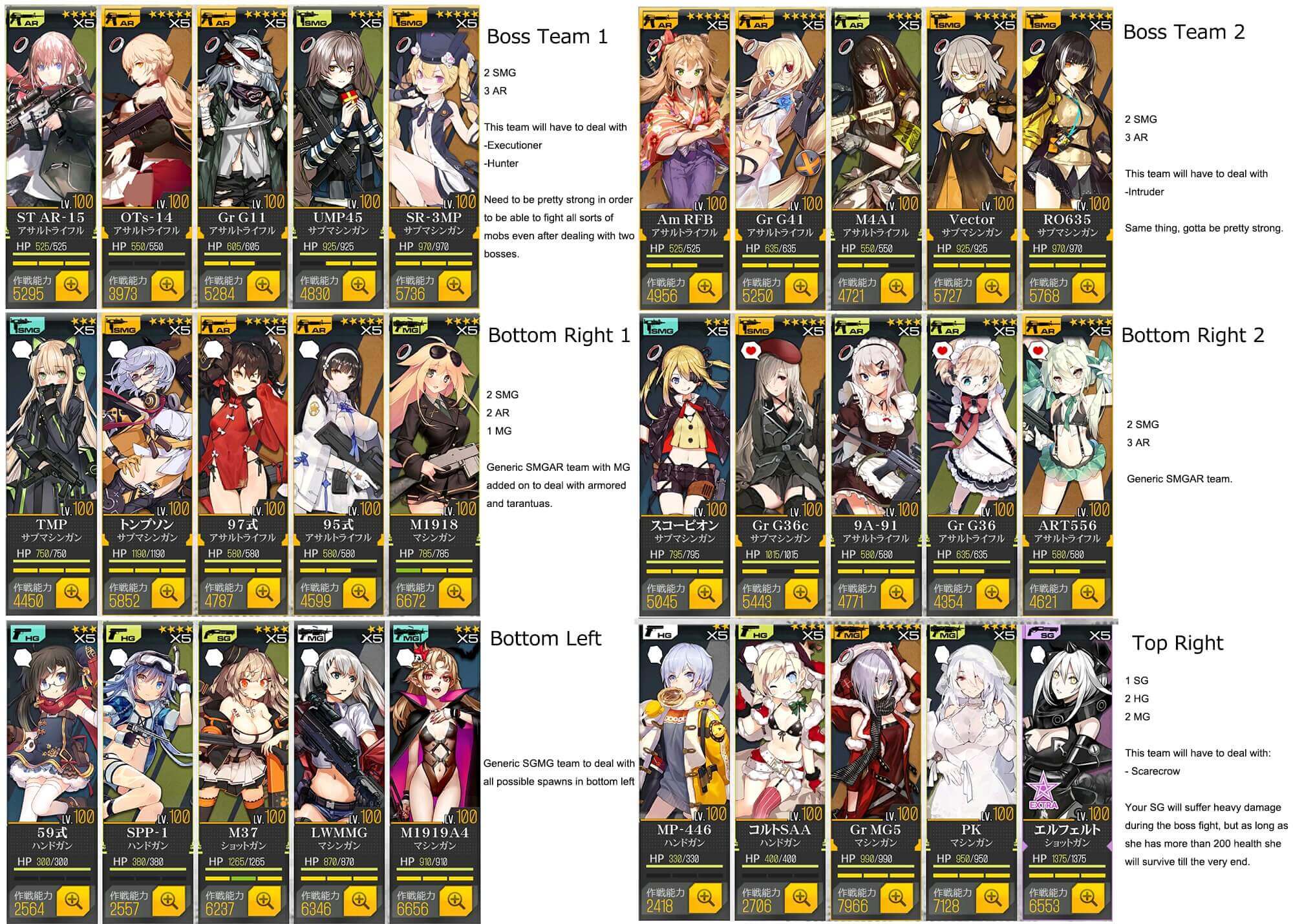 These were the teams I used during my 6 echelon test runs, note that I obtained the 184k score with 10 echelons instead of 6, the remaining teams were 2 generic [HGRF] teams and 2 [SGMG] teams.

There’s no tl;dr here, just read if you want to understand the mechanics. 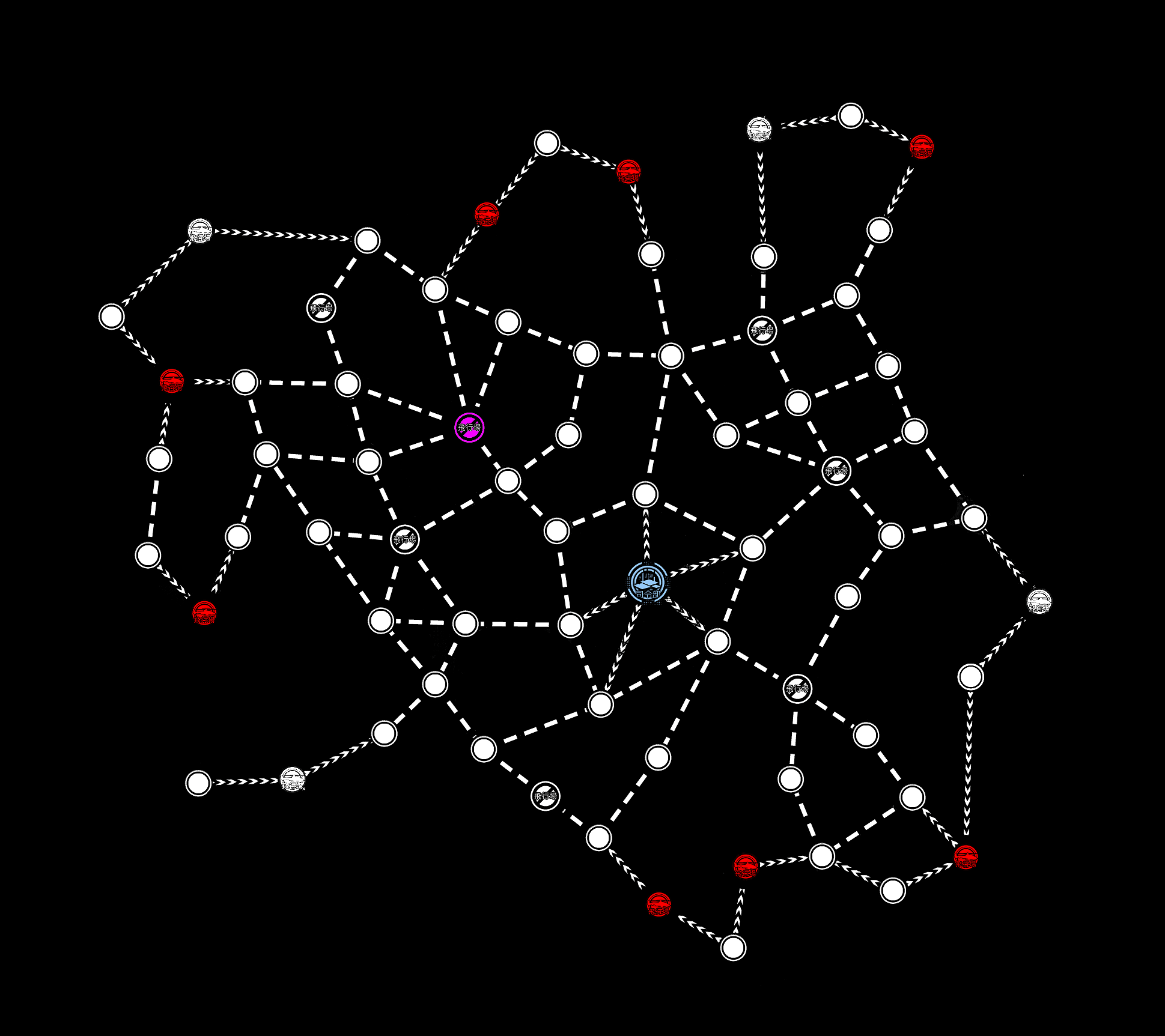 Ok let’s start with the spawn points.
The nodes indicated in red are mob spawn points, one random mob spawn from those nodes every turn. There are 8 of them so 8 spawns per turn, shocking I know.

Then we have the “RNGpad”, which is indicated in violet.

This helipad will spawn a mob every 4 turns if it was captured by an enemy, to achieve higher scores it’s recommended to let the enemies capture this helipad and leave it as it is.

As for what are clogs…
Mobs spawn on the helipads at the beginning of their turn (After you end turn, another shocking fact), THEN they start their movement. What this means is that, if you had a mob standing on the helipad before you ended your turn, it will stop the next mob from spawning on the helipad, resulting in 1 less potential kill. 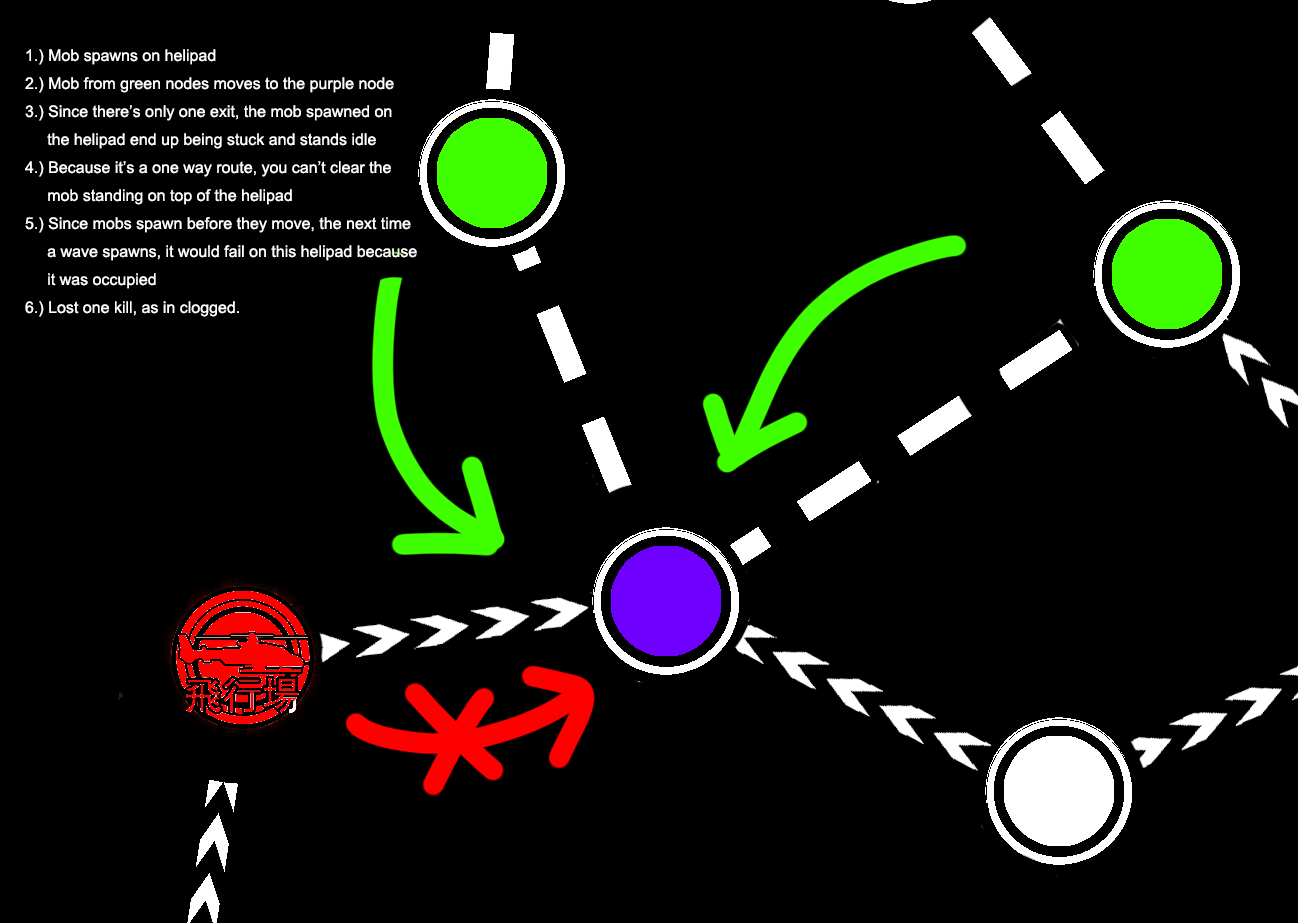 Here’s a map that indicates the clog points that you should be aware of. Try to keep the nodes in green clean without enemies at all times, since they can, and will move toward the helipads and cause a clog. 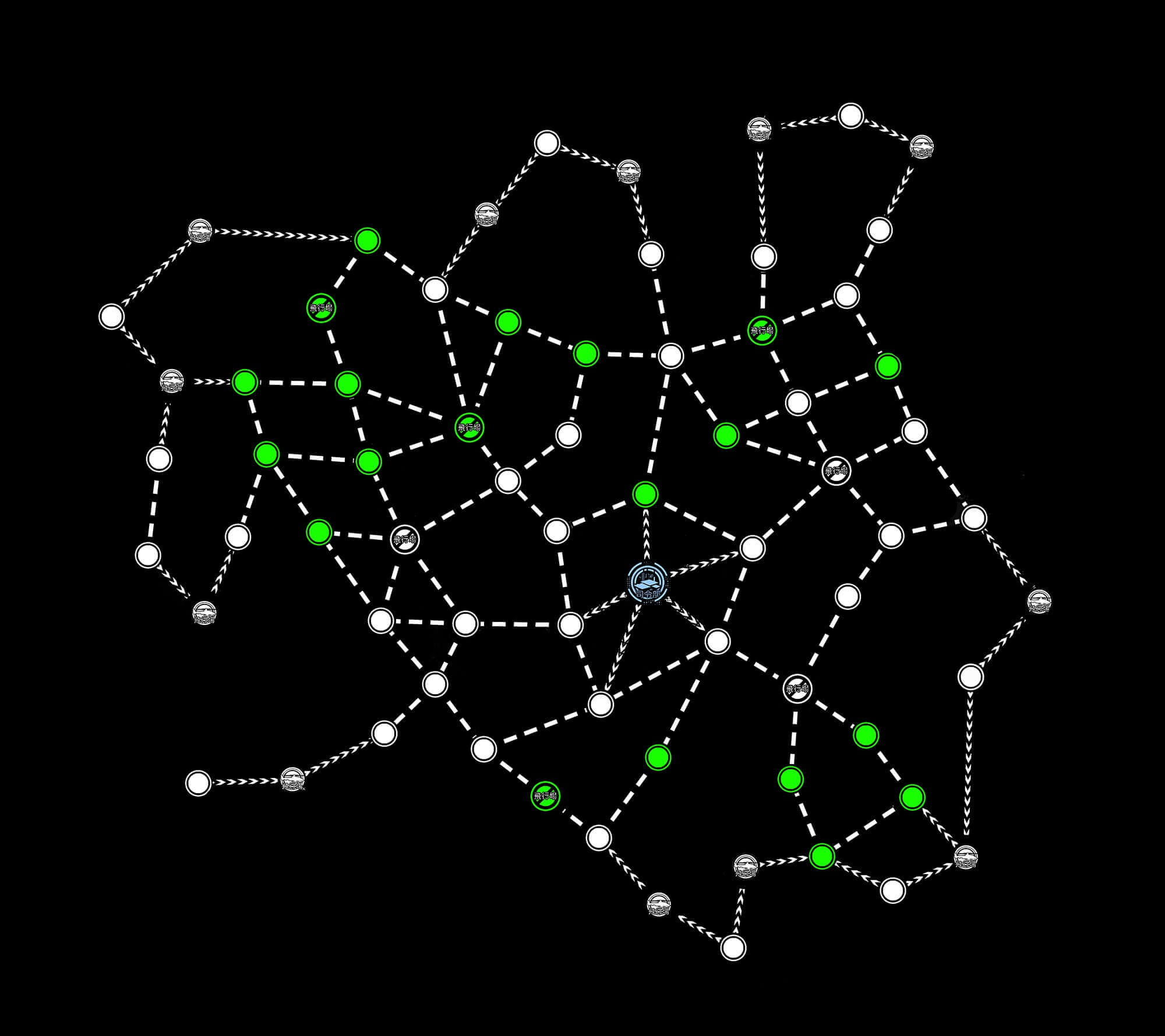 Next up, we are looking at where to set up camps for our echelons, and where should they patrol to clear mobs.
Colored nodes are recommended campsites, while the prowling area is indicated by the heart and the orange pp. 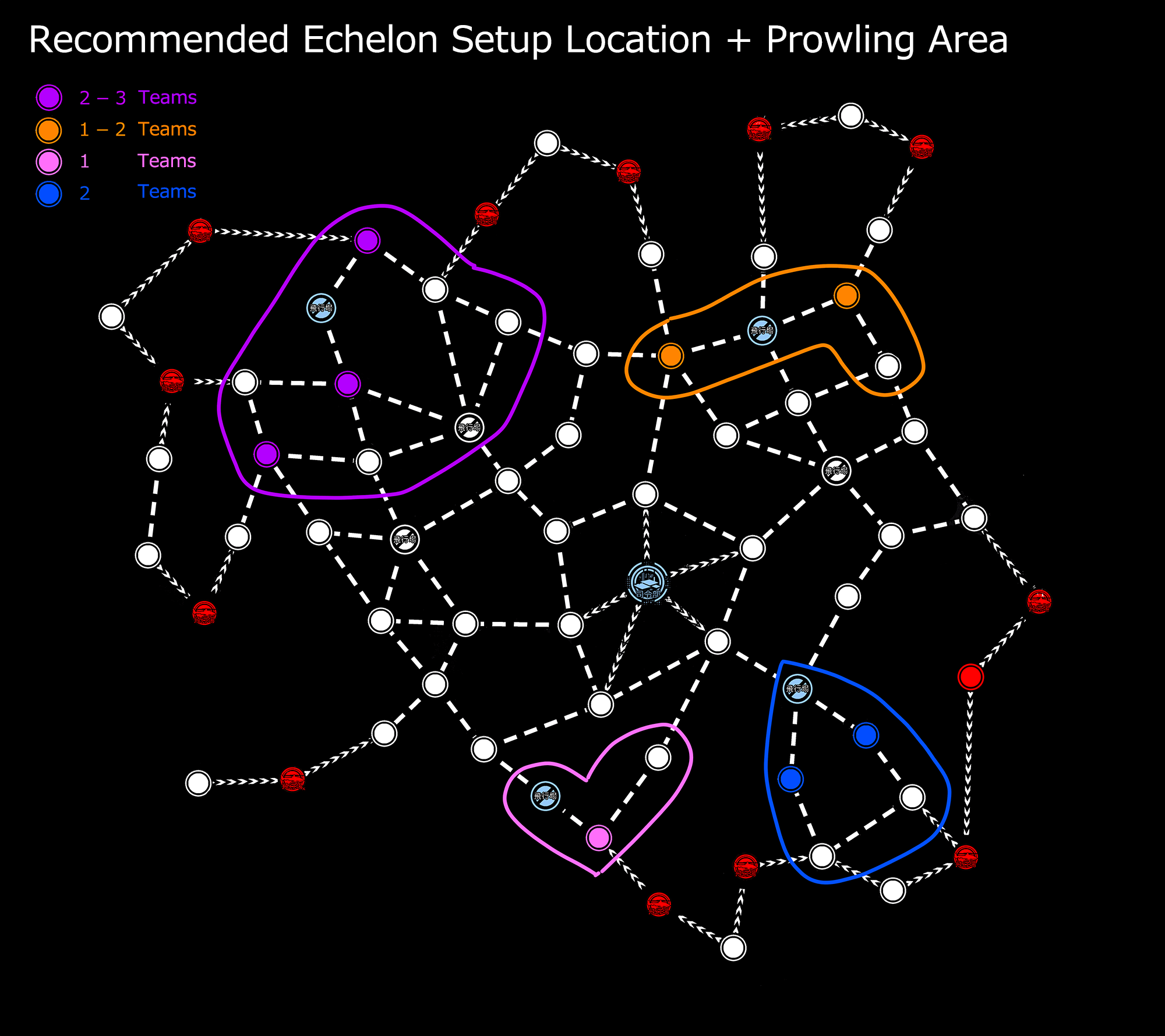 I recommend stationing most of the [SGMG] teams at the bottom side of the map, especially on the bottom left corner as it requires a lot of action points to have the other teams move there and back.

Micro while fighting mobs and bosses.

Doing so will reduce your damage taken by a lot. With a few simple moves you can take 1~2 hits or even 10+ hits less if you bothered to drag left and right.

Not much to say about her, simple fight and her slash takes too long to wind up.

Probably the toughest fight since she hits really hard and double taps. You might want to reset the fight until you get a good dodge spree to minimize damage.

Intruder
Around 40% (I think?) She will swing her gun around and start her MG form, just retreat your main tank while she’s in animation to stop it.

Her first hit deals like 170 damage and will most likely take out one link from your main tank, try to dodge it by kiting then she does 20 damage shots in quick succession.

Around 40~50% she will start spinning her guns around her and perform a super fast set of 20 damage shots. Reset it by retreating your main tank.
Another solution, which is kinda wonky, is to use force shield SMG against her (i.e. Thompson, G36C). Turn off autoskill after your ARs triggered their skills, and wait for Scarecrows wind-up animation for the pew pew, then turn on the force field manually. She can tank through the whole thing if you have decent skill level on the force fielders.

They take a long time to wind up their shots, have your main tank walk up, let them wind up for a sec or a tad bit more, then move backwards to reset the windup. You can do this twice before you run out of space.

Don’t worry about kiting the armored guys in the front, they deal minimal damage with low rate of fire.

Try to use MG against them when possible. Without good firepower they can shred your frontline. You can wait for half a second after they get into range and starts wind-up, then retreat ASAP.

Don’t bother kiting the front guards, or even the flying scouts. Focus on kiting the mobs with handguns.

This route I offer was tailor made for 6 echelons, if you are a 10 ech chad you can feel free to add more into the fray, send a team to the east helipad to deal with scarecrow, anything would work as long as it doesn’t delay your pace on getting echelons out and capturing helipads for resupplies.

Follow the colored path for routing, the filled nodes are echelon locations when turn ends. 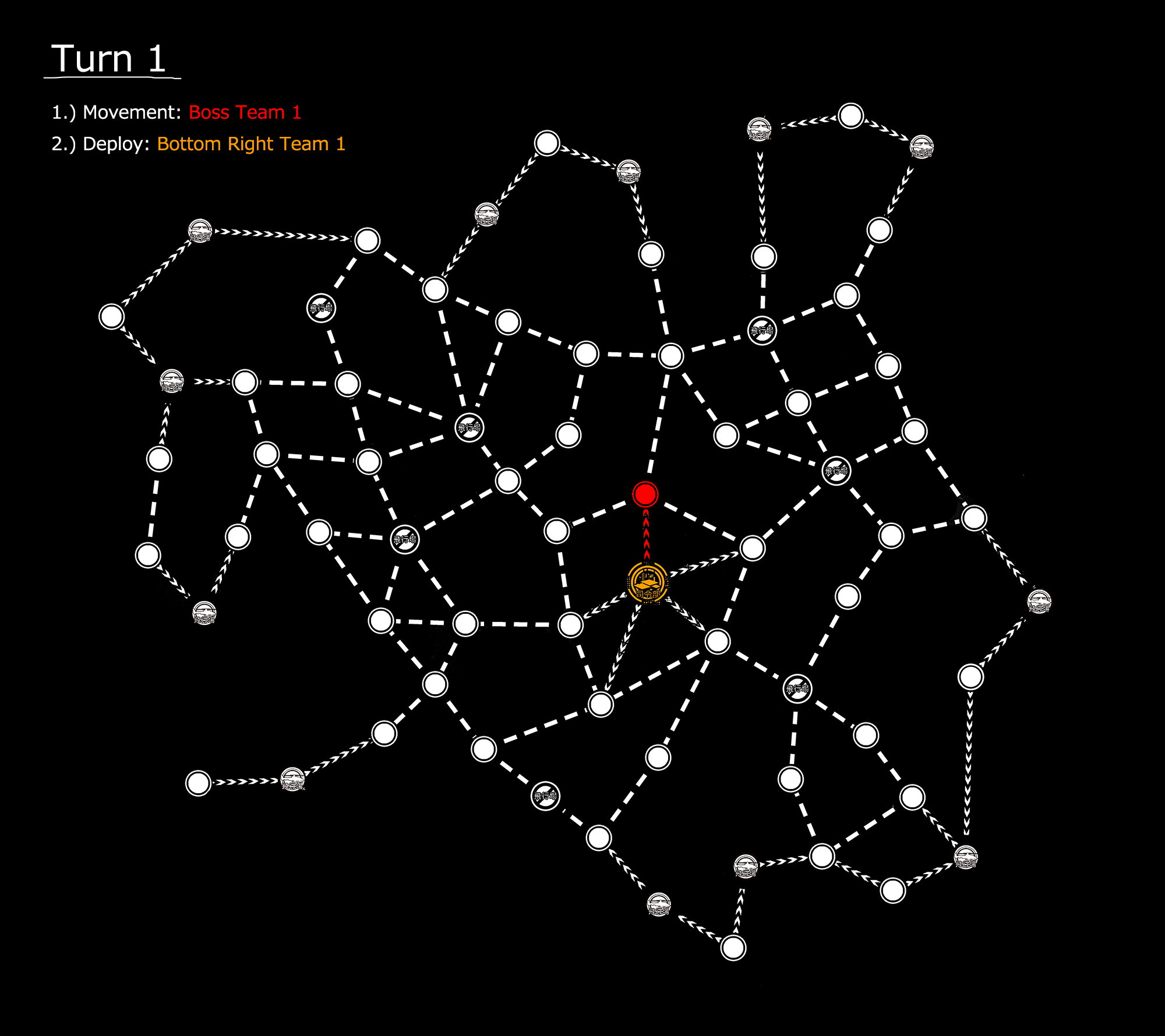 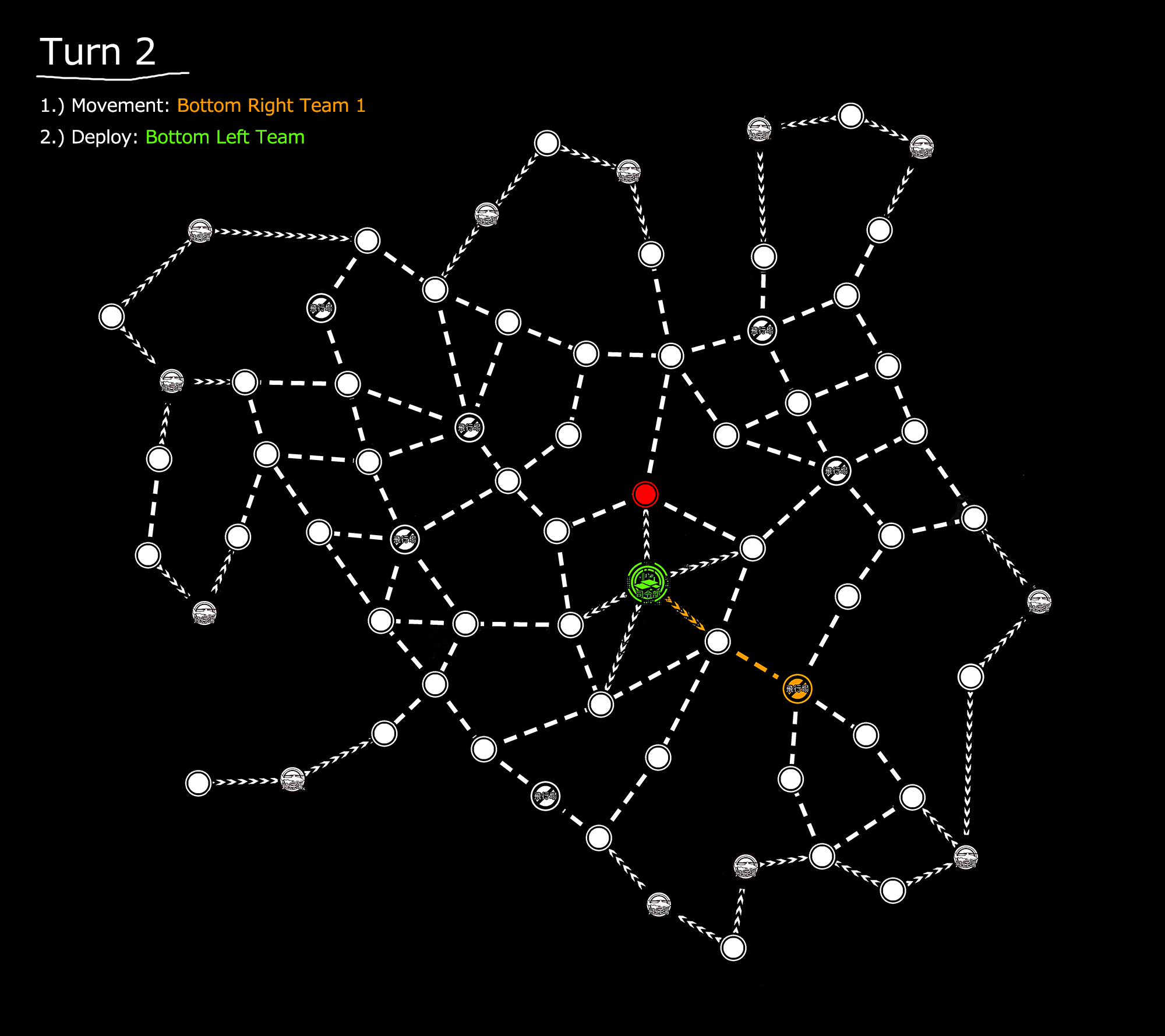 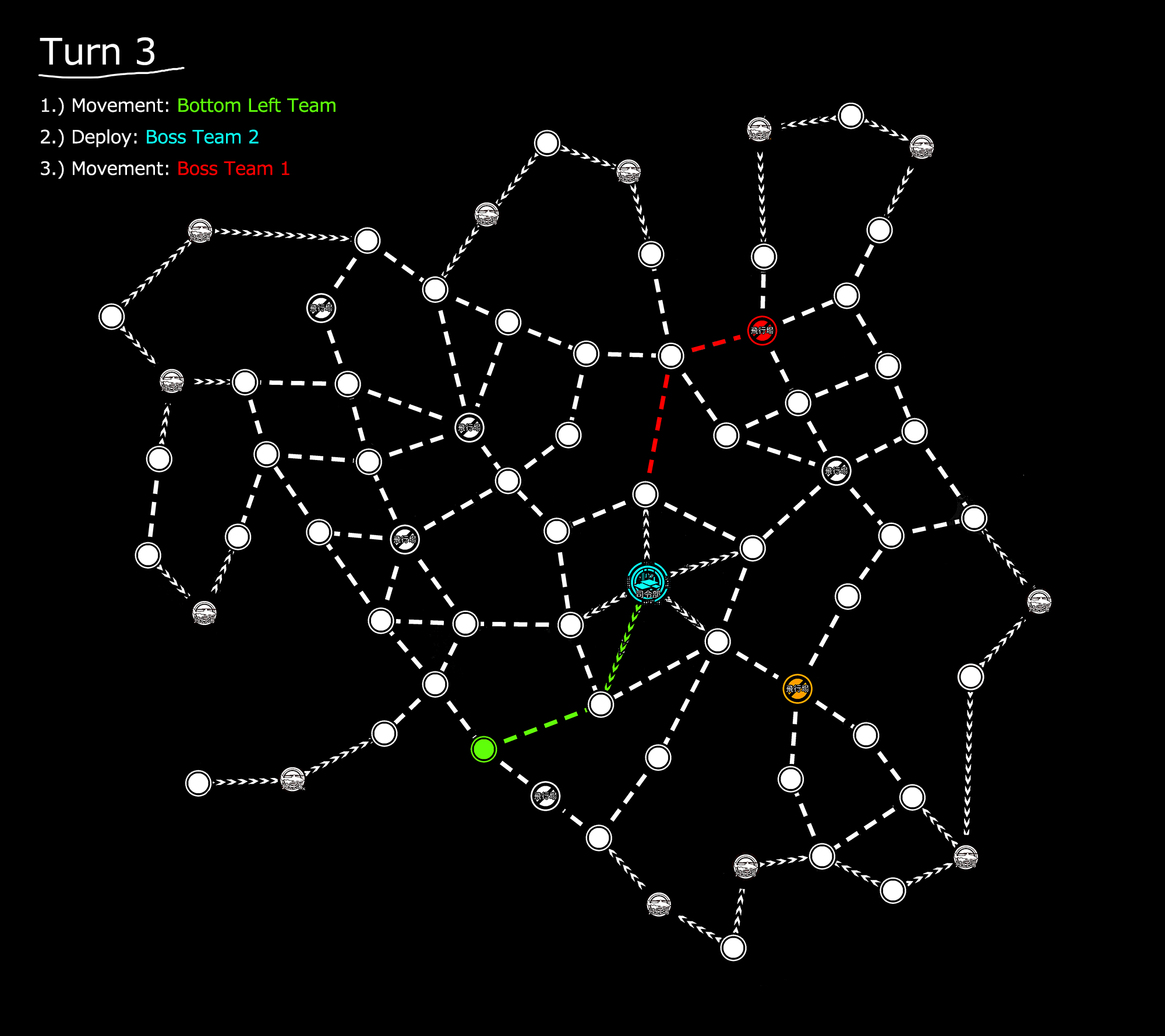 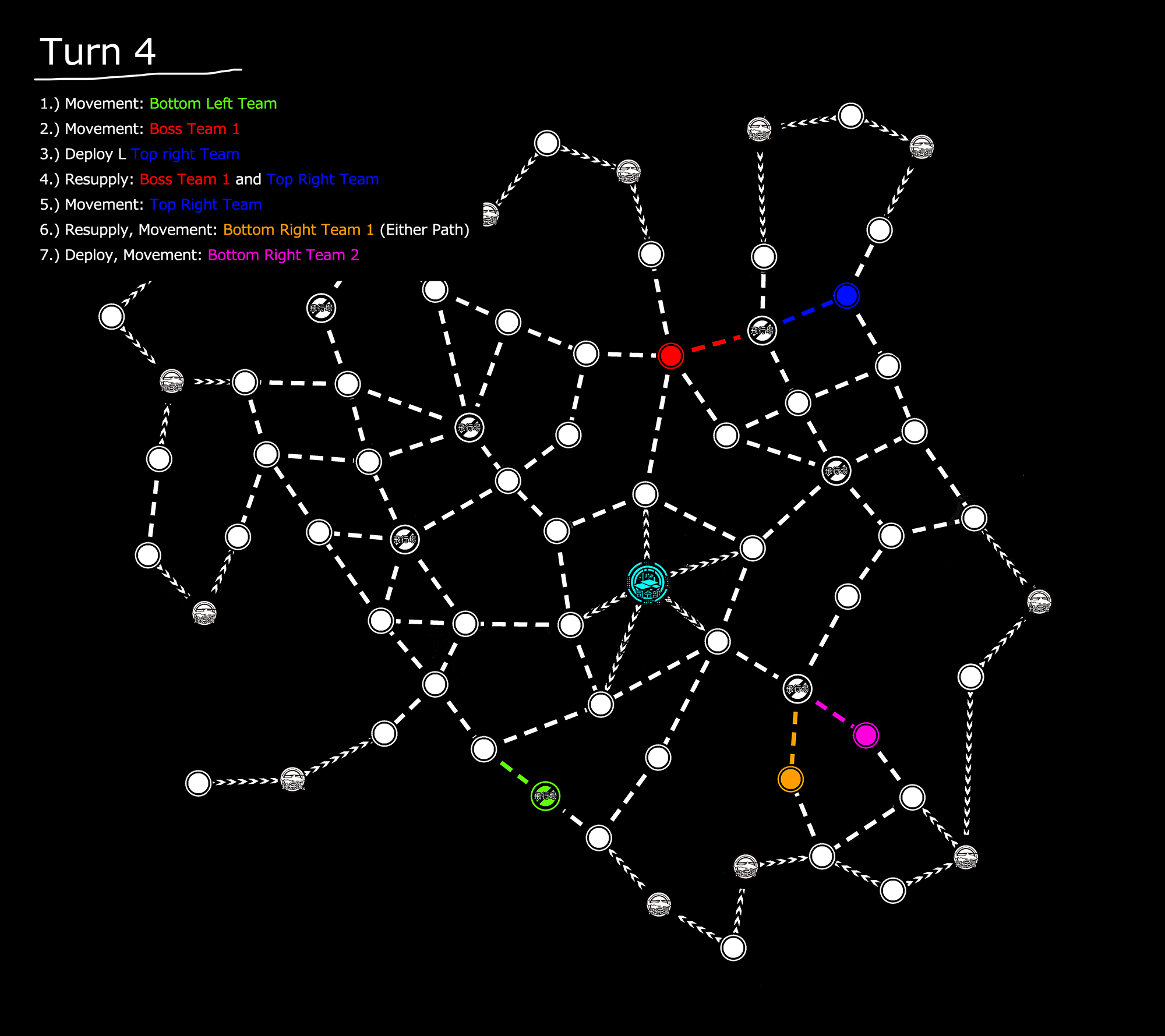 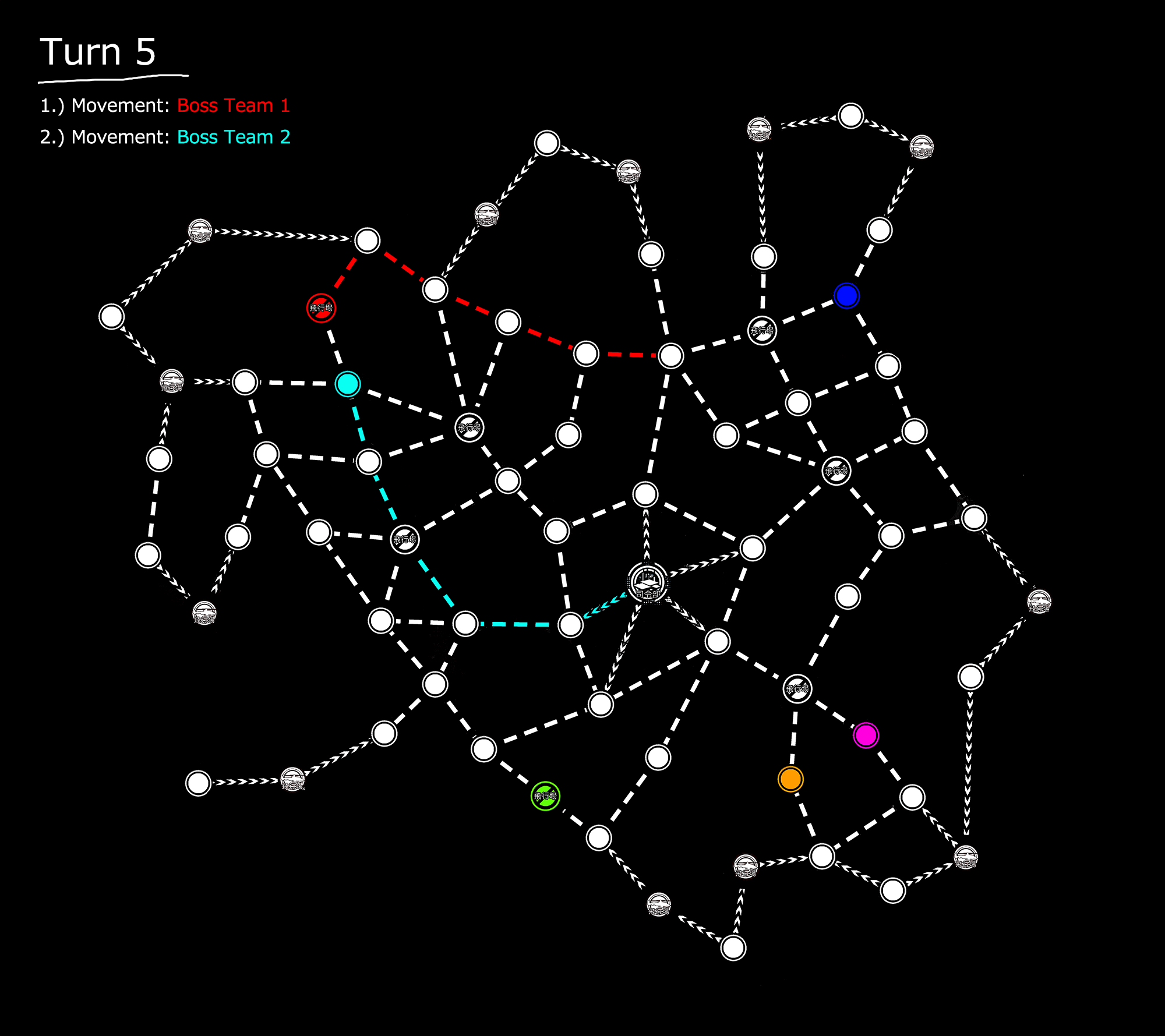 From this point on you just follow the prowling map and clear whatever spawns, while dealing with stuff you have yet to kill.

Then comes the final wave, the 20th spawn. You will need to position your echelons to where the mobs walk to right after spawning, so there will be no buffer and sometimes you end up with tarantula walking into your [HGRF] teams if you got unlucky.

The RNGpad spawns a mob too in the final wave, so you will have to cast a die and hope that the spawn runs into your teams.

The blue nodes are campsites for the final wave and the purple nodes are the possible outcomes from the RNGpad. 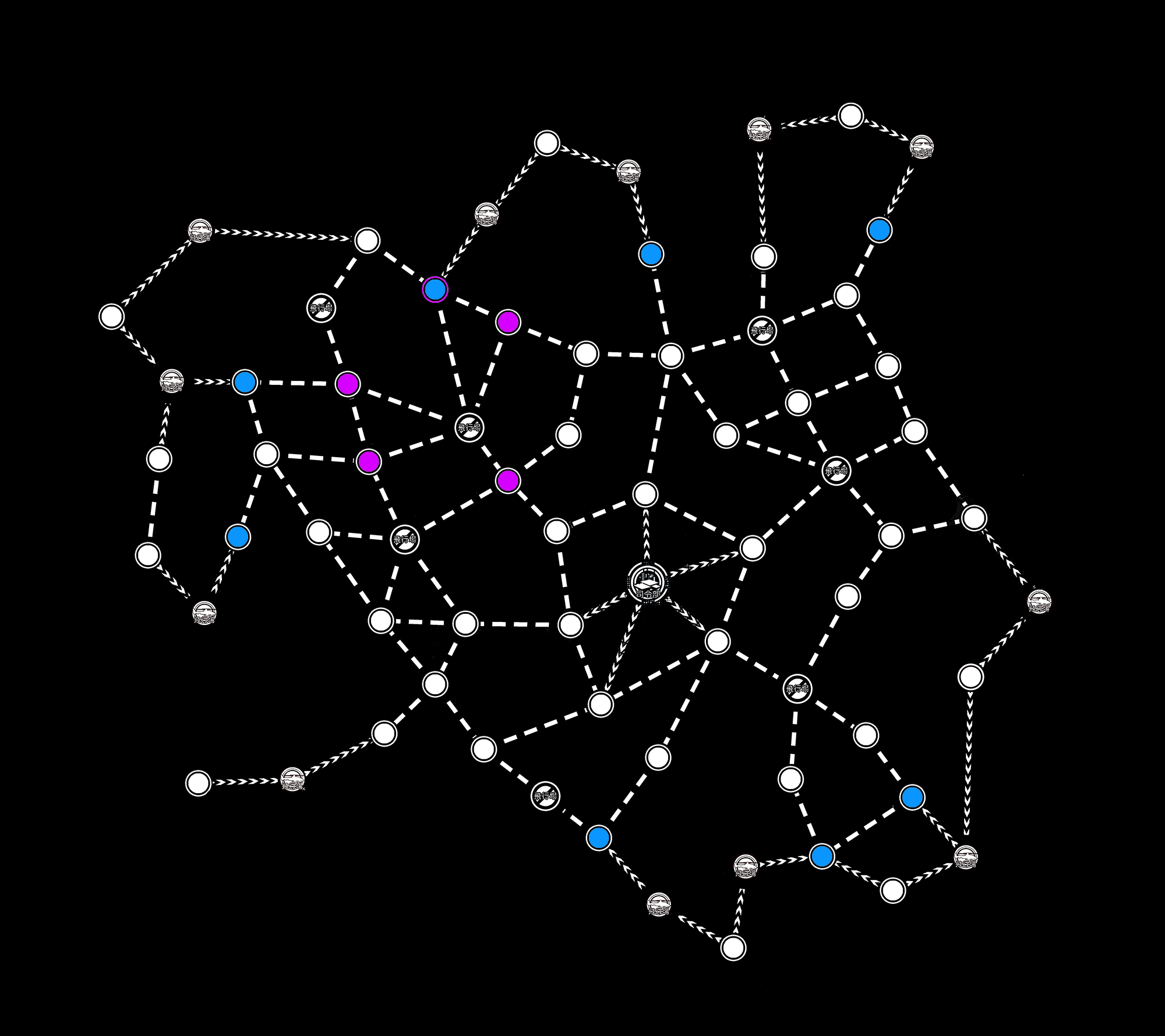 As for now, the top score in EN is 183k and 187k for JP, so how are you going to tell if your run is world-record pace or way off-course? I suggest using the [Score / Kill] formula to determine if your run is going according to your goals.

With the [Score/Kill] Calculations, you currently have a 1075.6 average score per kill.

Assuming that you had 5 clogs, that means in the end you will have approximately 164 kills, since 169 is the max amount of kills in theory.

Only pay attention to this method in later turns (i.e. turn 10+), since the boss kills will inflate your score by a considerable amount during early turns, resulting in way higher averages.

You should also keep track of the amount of clogs that happened during the run, as they can, and will greatly affect your final score. This can be achieved by comparing the perfect kill count to your current kill count + fielded enemies.

1 RNG spawn from the RNGpad every 4 turns

As we all know, this rank is heavily reliant on RNG when you are competing for the top-end spots, hence it’s essential to reset your run over and over again until you get a desirable  set of spawns over the first few turns in order to pull up the average.

Depending on what your goal score is, you might want different averages in your first few rounds, a decent place would be say 1200 average. Note that this calculation does not include boss kills, you will have to deduct (2.5k * # of bosses killed) off your score and (# of bosses killed) off your kill count, and take that average instead to counter the inflated score.

The following calculations is what I use for my runs, since I’m aiming for the top spot, which requires me to score higher than 187k.

If all the previous situations are true, I will keep going in the run until a clog happens or the average drops below 1100 before turn 10. I monitor the score average every turn, if it ever drops below 1075, it’s a reset, else I just pray and spray.

How to Reset Fast

How to save time without seeing the score screen/waiting for battles to end.

This method preserves all the ammo/ration on your deployed echelons, since the ranking map has a different mechanic on mission completion.

B.) During Enemy Turn

Just questions that people ask, or may ask.

Is having 6 echelons a huge disadvantage compared to 10 echelons? Is this game actually P2W?

It’s not a great factor to your score when you aren’t aiming for the very top. The only disadvantage will be less coverage during the wave 20 spawn, you will always have 2~3 less kills than someone with 10 echelons because they get to cover all 8 spawns and can allocate 2 teams to cover half of the spawn outcomes from the RNGpad.

Updoot the post if it’s useful, so it gets more exposure.