Today MICA has announced their roadmap schedule for January 2019, and there is a lot to go over! So let’s jump right in. 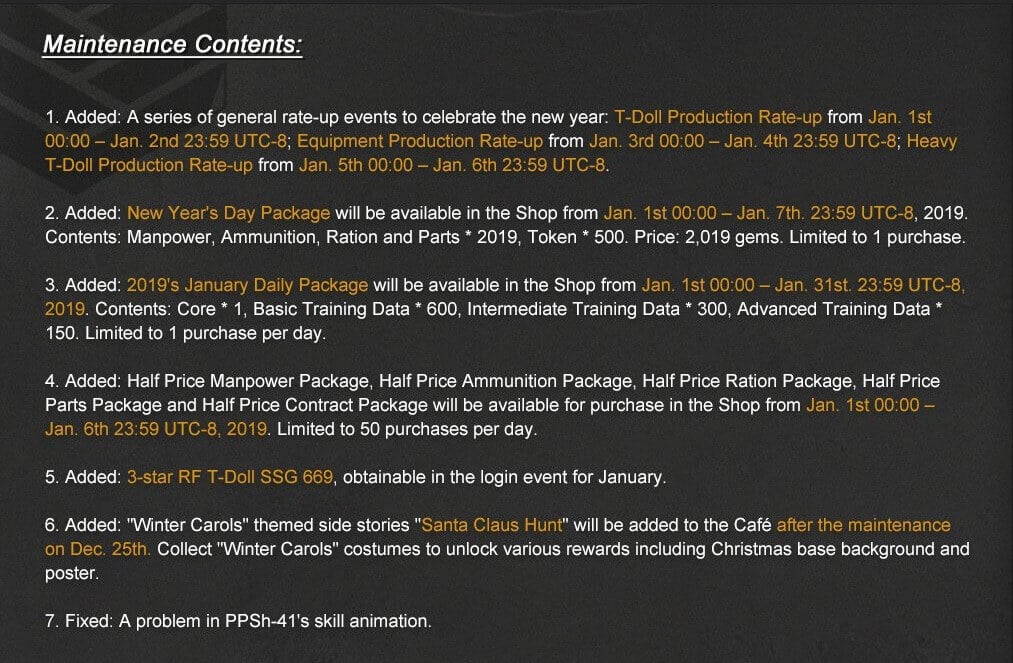 Christmas Maintenance note has detailed information on the General Rate up week, which includes days for regular T-doll production, Equipment production, and followed by Heavy T-doll production. To clarify, General Rate up increases the chance of obtaining both 4 star and 5 star dolls, and it applies to all existing 4/5 star dolls as compared to new T-doll-batch launch. If you are a player looking to rank, focusing your resources on the Equipment rate up is advised, but be careful not to spend too much resources, since the Ranking map will demand a lot itself. 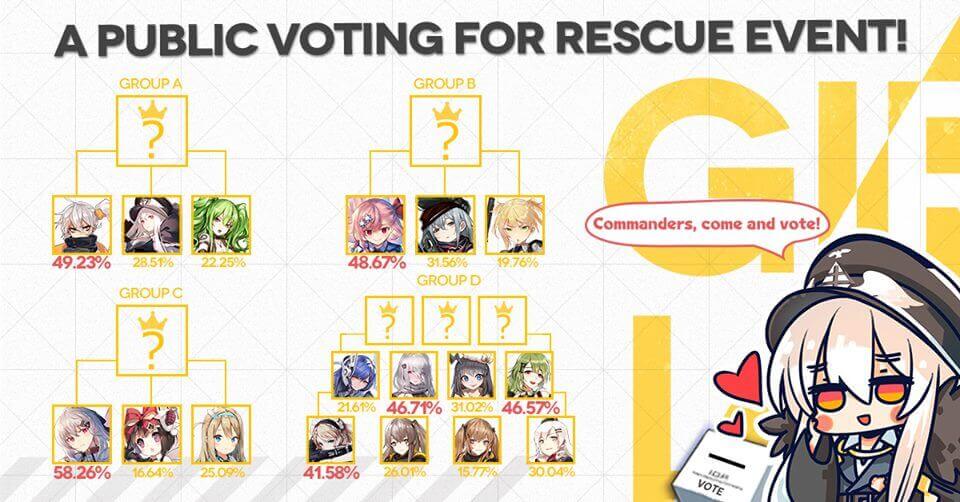 As you may have noticed, there is still a vote for a Special Rescue Event in session now until the 28th! As it would seem, the Rescue event will be replacing the traditional monthly batch release of new dolls for January and will be likely to follow the format of a Boss kill event in each chapter to get a chance to earn event drops. Right now there are only 6 dolls that’ are going to be selected, but we do have total of 7 chapters… there’s small hope for another doll to be selected along with the voted dolls for the Rescue Event!

It’s official! Our first major winter campaign. Compared to Operation Cube, it will be more time consuming, higher in difficulty, and loaded with far more rewards and drops! If you are curious about guides, here is little sneak peek of what we are preparing right now. 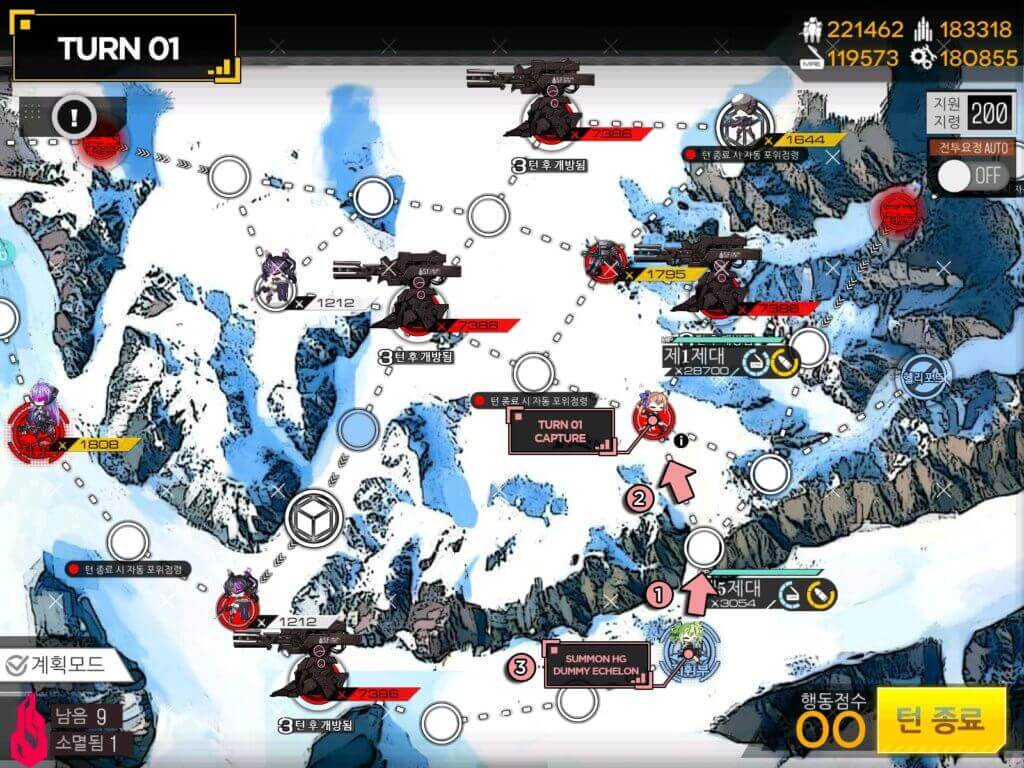 Keep an eye out for announcements for more information and login event information! 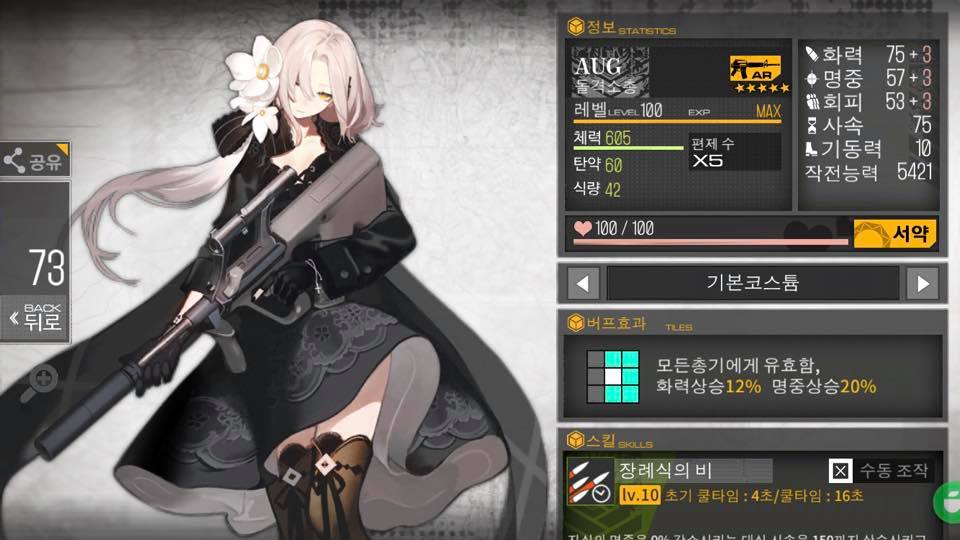 Probably the most surprising announcement out of the entire roadmap for this month. It’s yet another Point Event with the 5* AR, AUG as reward! AUG is special in that her buff tiles affect all doll types! [Increases FP 12% and ACC 20%] What’s more interesting is her skill: at level 10, her skill [“Funeral’s Rain” roughly translated] reads: decrease ACC by 0%, increase RoF to 150 and will shoot randomly. This means her targeting will become randomized with each shot.

So far the consensus among older servers is that she is worth pouring 105 cores into [She is not producible, just like 5-7] due to her unique skill and buff tiles. So she will be a must-have.

While we are unsure of what the new Resupply Gacha will be, you can check out GFC’s Costume document, which shows all the skins that have been released so far!

Lastly, there will be an QnA Session on Official Disord Channel on the 9th of January! If you have any questions regarding the future of GFL, post your question here!