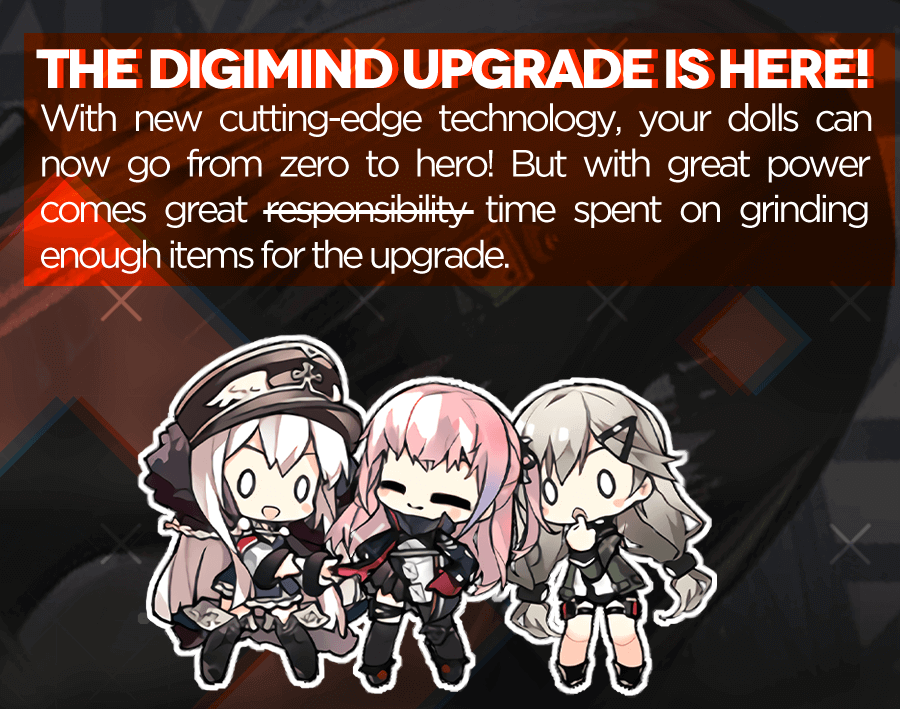 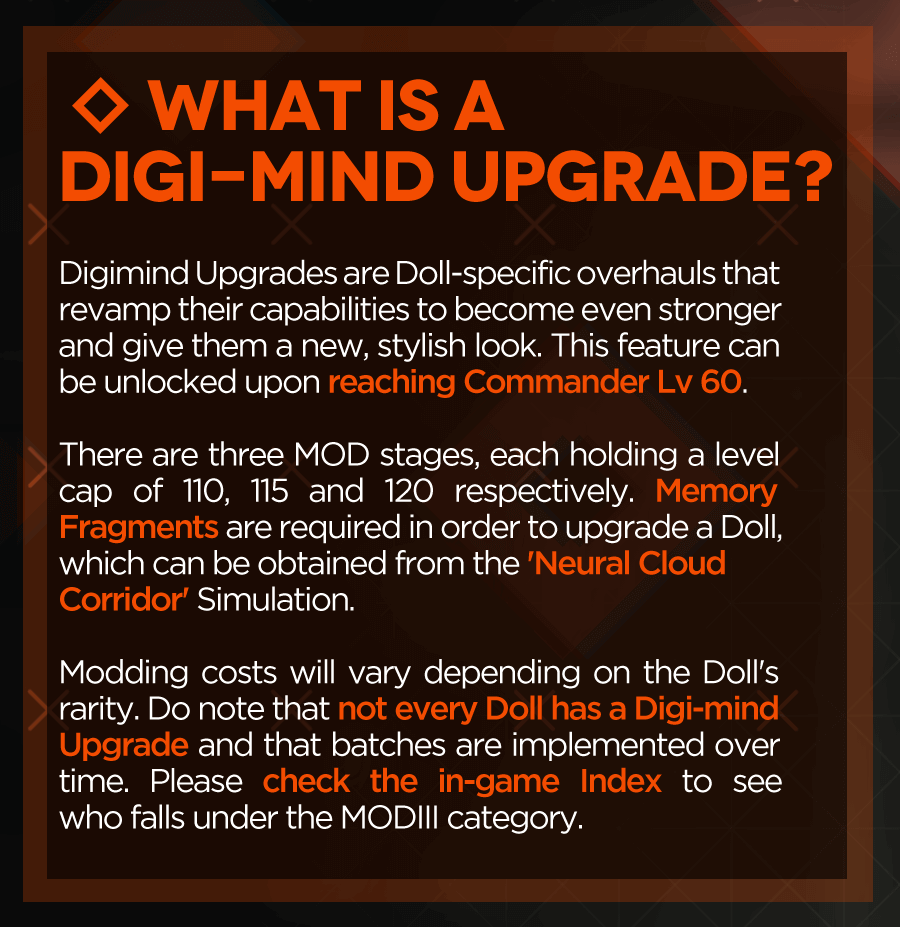 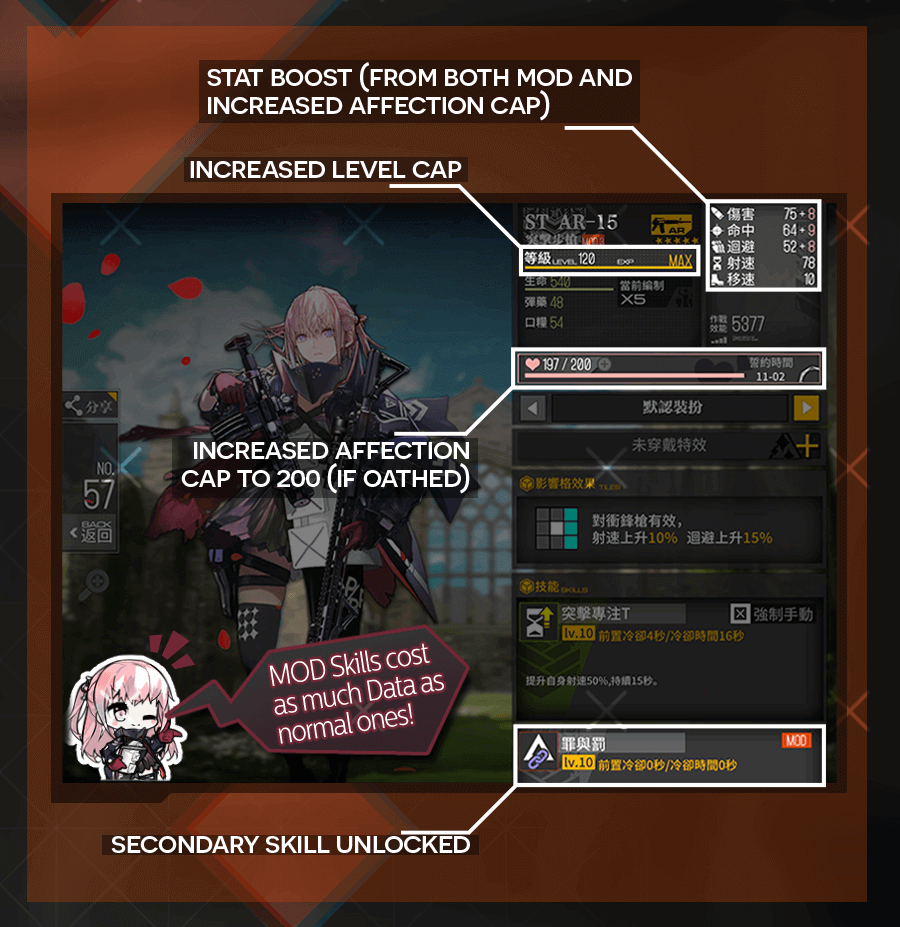 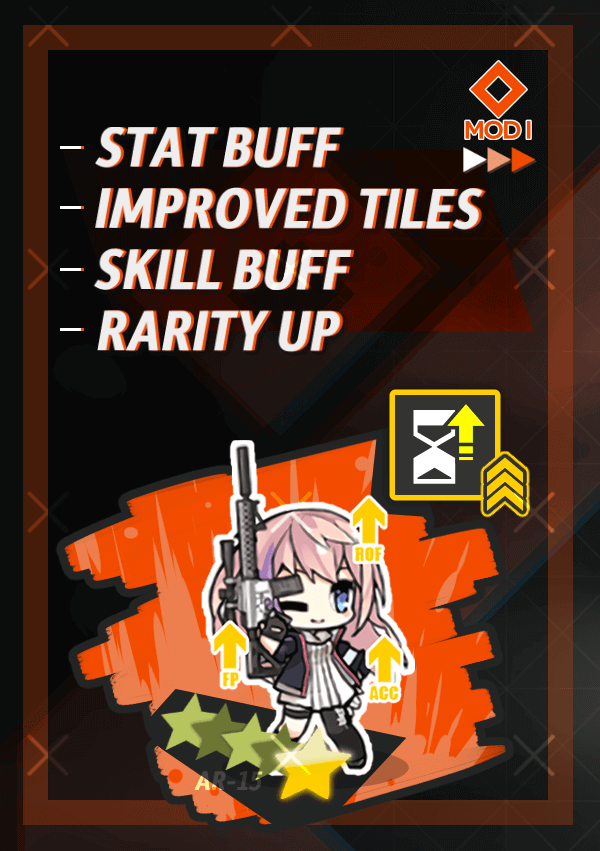 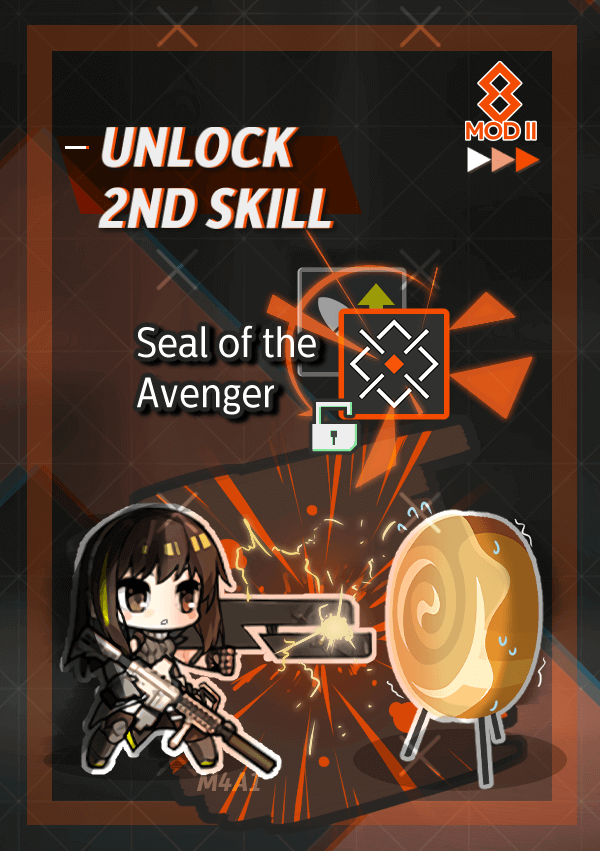 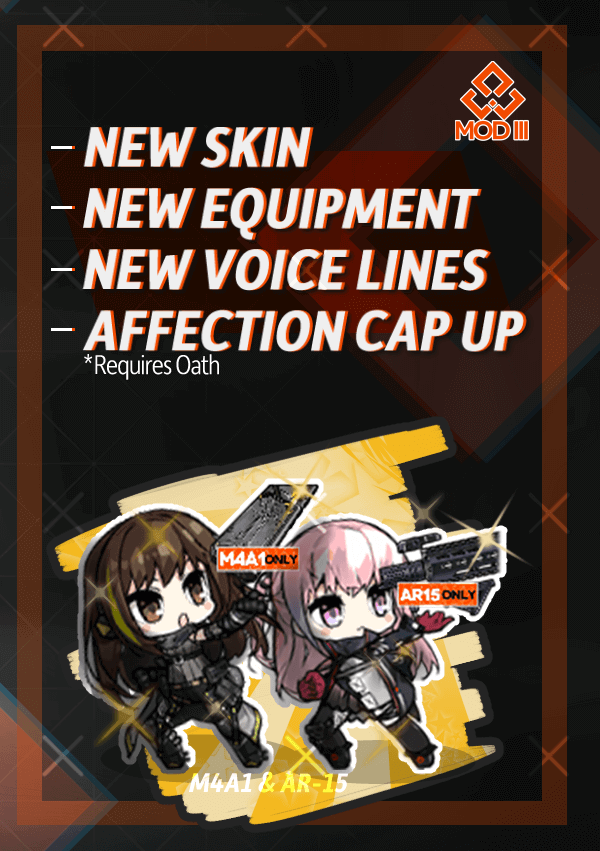 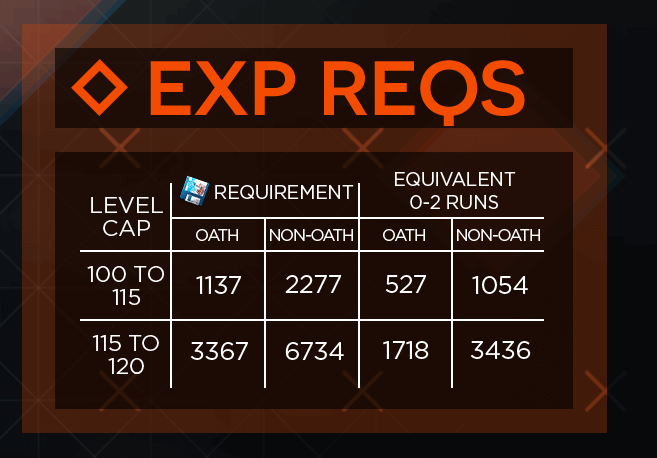 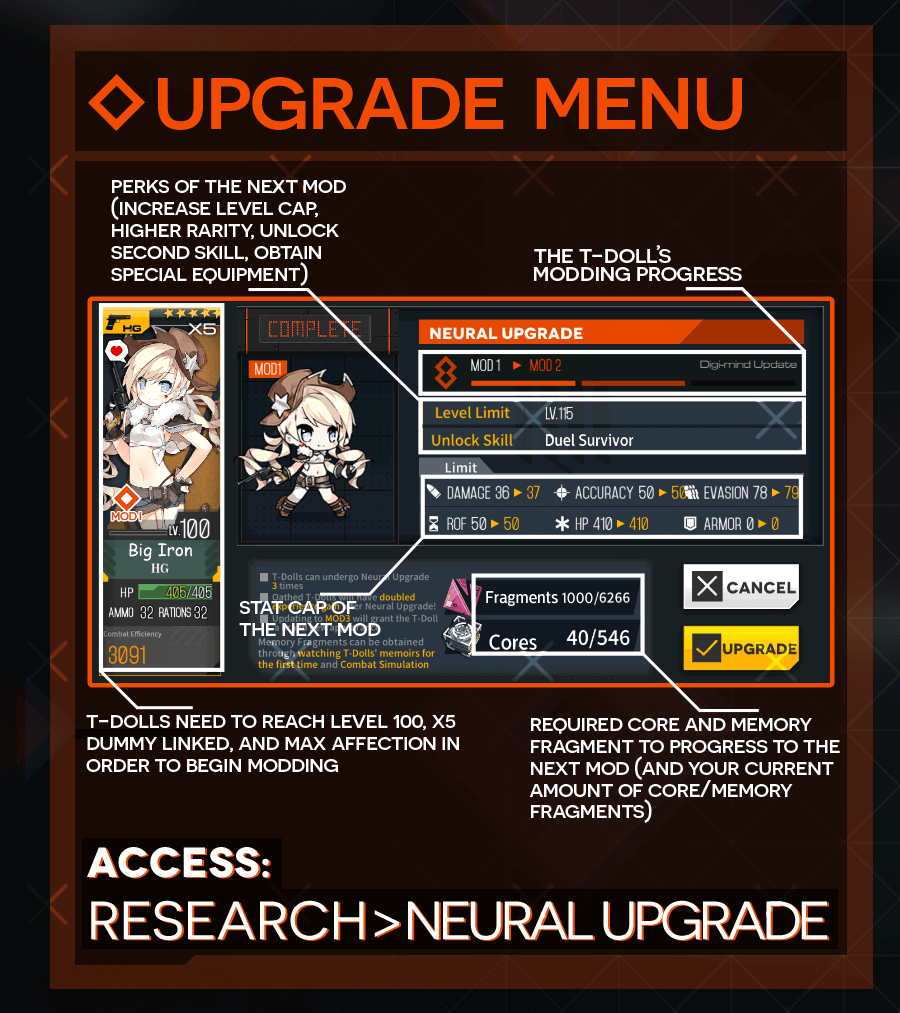 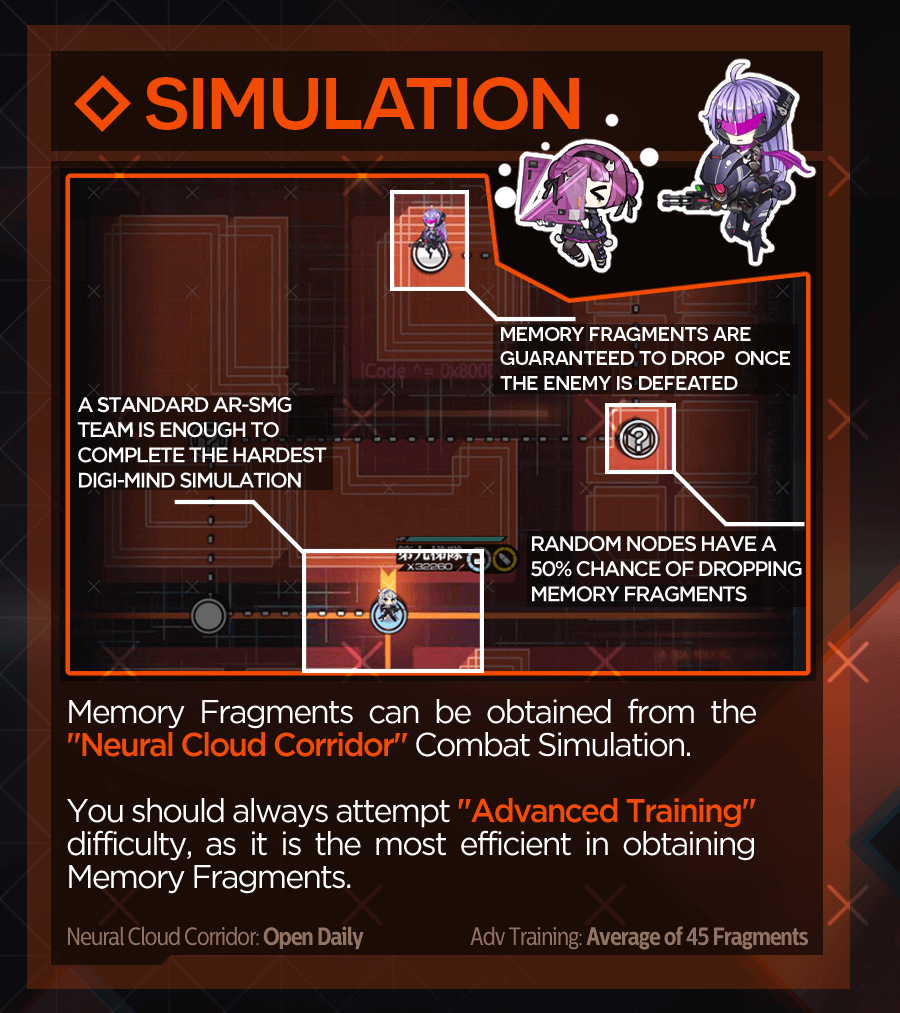 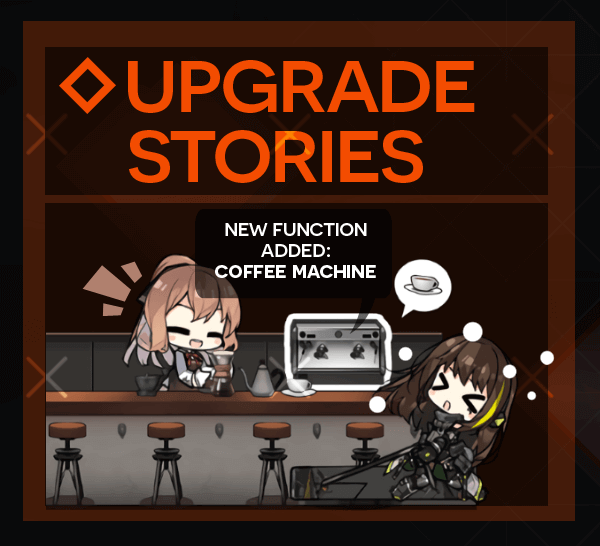 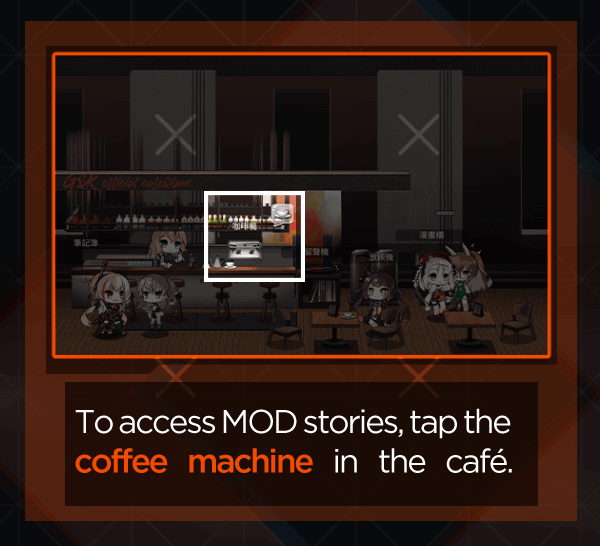 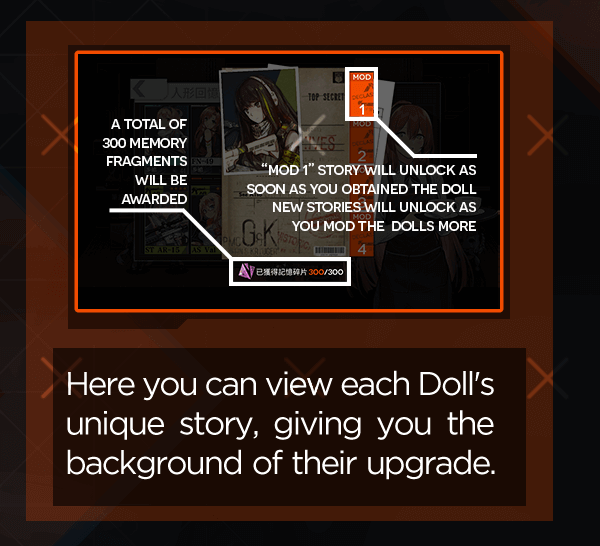 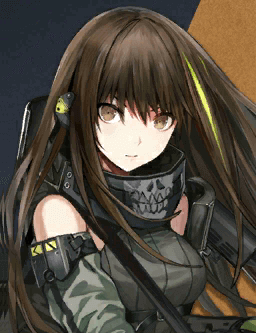 New Skill: Seal of the Avenger
Current target will be marked with the Seal of the Avenger during Damage Focus’s activation. When 3 or less allies are on the field, reduce RoF by 70% and increase damage by 600%, and deal 100% splash damage to enemies within 2.5 yards of the target and mark all enemies hit with the Seal. (Damage Focus is still active during this period)

The marking aspect of her mod is pretty simple, it provides pretty neat synergy with AR15’s extra shot and somewhat negligible benefits with SOP’s. The craziest part of her mod comes from the 2nd aspect, where she goes full Jupiter Cannon on enemies when there’s only 3 friendlies on the field, including M4A1.

The damage increased is multiplied onto the damage buff from Damage Focus T, which is ridiculous. Add on the fact that it can never miss on its main shot, M4A1 becomes a terrifying opponent for all SF scums. However, only the splash is affected by crits and accuracy check, so do keep that in mind.

A common setup for a M4A1 Cannon team usually includes a RF targetting the backline, while M4A1 decimates the frontline entirely. Depending on what DPS you’re pairing M4A1 MOD with, the HG supports will be pretty different. For example, a common IWS M4A1 double Jupiter setup includs SAA MOD, Calico and Mk23 (Later on replaced by P22) or Stechkin, depending on which buffs are needed more.. Setups with M200 would swap out Calico for a more damage oriented buffing HG, while a setup with Grape could be more RoF focused. You can then retreat 2 of the HG after all their skills procc, then manually activating M4A1’s skill after.

M4A1’s MOD3 armor also unlocks many new farming compositions where she can become both the tank and the DPS. This includes 10-4e and 11-6 setups, where M4A1 sits at the front, taking damage while getting buffed by 2 HG.

Overall, there’s absolutely no reason you shouldn’t be modding M4A1 (unless you’re adding restrictions on your playthrough). Giving her a “highly recommended” status would be underplaying her unique but frequently used role and all the dynamics she provides with her mod. M4A1 earns herself an “absolute must” for modding. MOD2 will function nicely but MOD3 opens up many farming team options.

New Skill: Crime and Punishment
Attack with both weapons during Assault Focus’s activation. The secondary weapon will deal 10% damage, doubled to 20% against targets marked with the Seal of the Avenger. Secondary weapon’s shots counts as a separate hit. 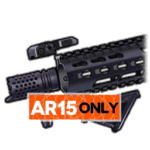 By far the only AR that can cap her own RoF aside from SAR-21 and AUG, AR-15 mod turns a beast into well, an even more dangerous one.

Her special equipment at MOD3 allows her to ignore any other secondary accessory, along with boosting her overall damage. Without the penalty, AR-15 just nicely hits the 116 RoF cap. When paired with M4A1 with her Mod2 skll, AR-15’s bossing capabiltiies shoot through the roof, becoming one of the best sustained DPS in the game without being held back by uptime. Due to her MOD2 skill being essentially a 2nd shot but but with 10%/20% boosted damage, she becomes an insane counter towards anything with upper damage limit (Nyto holograms).

With her tiles being able to hit the main tank SMG from anywhere in the backline, it’s pretty clear that AR-15 only needs to be buffed with FP/crit damage. Her double scope perk also allows her to serve as a pseduo-night AR, gaining access to crit damage goodies from Fairies. However, her MOD2 skill proves to be barely any use against heavily armored enemies. Her raw stats and DPS before, without her MOD2 skill, still proves to be at an insane level, but do keep in mind her drawbacks.

Overall, AR-15 is a must mod for her overwhelming sustained DPS, which you’d see more use for later on. Highly recommended to MOD2 at minimum. Though her MOD3 equipment and stat gains are definitely recommended especially if you have her oathed!

New Skill: Dire Deadeye
After throwing smoke grenade, the next 7 attacks will target enemies from closest to furthest accordingly. Every attack deals 150%(200% at SL10) Damage.

One of the rarer “DPS” handgun, the digimind for M1911 does give her a much more unique role.

For M1911, her kit is all about initial damage control. Being able to take out a low number of squishy enemies along with slowing them down, her most common usage tends to be that of a pseudo-RoF buffer with one of the only few viable defensive options against Hydras. By penalizing Hydra’s abyssmal movement and attack speed more, she’s able to slow them down by a lot and buy much needed time for your RFs to dispatch them, while her MOD2 skill can assist in taking down weak escorts such as unarmored Cyclops.

Another common usage for her is simply to stack FP tiles for her initial DPS in a 5 HG team against weak mobs, which you’d probably use quite often if you’ve modded her in boss bullying scenarios (Ch 1 to Ch 6). Aside from that, her DPS isn’t particularly amazing in most cases either due to the sheer number of mobs you have to deal with or simply the fact that her low FP stat as a HG can’t do much. Think of her as assistance rather than over investing in her in setups where you’d be using her, unless your Fairies and gears are well invested enough to obliterate enemies with her MOD2 skill.

For most cases, you can stop at MOD2 with M1911. MOD3 is fine as well, as her SPEQ does play pretty well in her favor. Just bear in mind the cost as well. Optional to have. 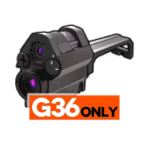 G36’s Mod plays heavily on her strength of buffing offtanks while maintaining superior FP on her own side, making her a pretty amazing general use AR all around. She gets a much needed upgrade on her first skill, matching that of G41, while also receiving amazing utility via her Mod2 skill.

Her MOD2 skill revolves around mainly supporting the frontline, while giving herself a pretty neat amount of RoF. Her MOD2 skills has a slight hint of TAR-21‘s and ART556‘s, but with a much better uptime, with an FP buff and a similar uptime on RoF (even though it’s lower in value). The combination of her tiles paired with the evasion buff for the frontline however comes into play very often. Having almost everything covered for your frontline off-tank aside from ACC, G36 provides great buffs for SMGs such as SR3-MP or JS9. 25% EVA, while not very high, is pretty good considering that you’re bringing 2 DPS (G36 Mod + off-tank) which synergize with each other well, as compared to having to bring something like G11 + SR3-MP + HG/ACC buffing AR. In addition, she does have the benefit of buffing the main tank, further increasing the surivability of the team.

Unlike MDR, she doesn’t neglect her own DPS either while providing the EVA buff for SMGs as an offtank buffer AR. She also offers much more versatility with the pure simplicity and effectiveness of FP/RoF as compared to G11, who focuses on bursting with multiple shots, occasionally having issues with higher armor targets.

However, G36 Mod suffers having 75 RoF till level 120 which brings her up to 76. While they don’t differ when buffless, most off-tank RoF tiles that buffs AR can’t be fully utilized with 75 RoF. An example would be SR3-MP and Vector’s tiles. With 75 RoF, she’d require 19% to go from 19 frames ot 16 frames and 26% to go to 15 frames. With 76 however, she only needs 18% and 24% respectively. Minmaxers should take note of this aspect when upgrading G36.

Overall, she earns a “Recommended” status. The utility and versatility of her Mod is pretty good in majority of the circumstances ARSMG are used in and she doesn’t have any noticeable flaws, but she doesn’t bring anything entirely too new to the team either. 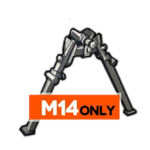 The War Goddess is back, packing a much more devastating firepower than ever.

M14 Mod plays on all her strength and elevates them to a much higher level, resulting in her raw DPS exceeding even that of WA2000 / Lee, who are both are frequently regarded as the top 2 DPS RFs. Her Mod2 skill is pretty simple to understand, which pretty much adds a 1.1x multiplier for 6s to all her attacks in a 100% crit rate + no AP penalty scenario. Being a damage buffing RF also means that the common AP penalty issue isn’t that big even if you don’t have enough AP to fully pierce. Oh right, she gets even more RoF with her Mod. As if her base RoF wasn’t ridiculous enough.

Surprisingly enough, her MOD3 equip isn’t as terrible as it seems. The added accuracy is pretty neat, considering her accuracy is on the lower end of the spectrum among RFs. Feel free to invest in her SPEQ if you have the resources, otherwise it’s rather optional.

With many shikikans having a M14 levelled already from their early game, it wouldn’t be that big of an investment as compared to modding T-Dolls that are terrible pre-mod and great post-mod, since you wouldn’t have to start from scratch. While not bringing anything new with her MOD2 skill, she does surpass all existing options in DPS RF category, while being a 3* > 4* Mod also means that it wouldn’t be that painful on your resources. Until R93 comes along, M14 would be your go-to RF for general usage. Even then, R93 requires a charge-up time to get her RoF stacks (which she loses if she switches target) , while M14 can just pump out all her shots. Recommended.

Skill
Hunter’s Mania: Begin charging after skill cooldown ends (was reduced by 1 second), gaining 1 charge stack every second, up to a maximum of 7 stacks. When skill is used, aim for 1.5 seconds, prioritising the enemy with the highest health that can be killed in 1 shot (affected by link protection). If there are no enemies that can be instantly killed, prioritise the enemy with the highest health. After aiming, deal 5 ~ 10x damage that ignores HP shields based on the current number of charge stacks. All stacks will be consumed on skill use.

New Skill: Chain Reaction
When Hunter’s Mania kills an enemy, activate skill again and gain 3 charge stacks. Can activate up to 3 times. The additional skill uses incur no aiming time and do not gain bonus damage from charge stacks, dealing 4x damage that can miss, depending on target’s evasion. Prioritizes enemy with the lowest HP. Increase damage of normal attacks and skill by 10% when attacking enemies with more than 50% health.