Good day GFL players! Today I would like to talk about one of our newest addition: Noel and her Skill. 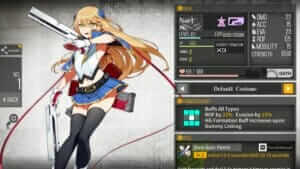 Summary of her skill

Noel’s skill looks like it could deal lot of damage but her hitbox also exists during her skill animation when she is right in front of the enemy along with the dummies. This often leads to her straight up dying against SF bosses with AoE effects. Her skill also has limited effective area and doesn’t cover the whole enemy group. As a result, people in KR and CN server call her the “suicide doll”.

However she has one hidden(?) skill that many are only now realizing how useful it is.

If you watch closely, the Manticore unit that gets targeted by Noel’s skill freezes.

The Manticore unit freezes until Noel is withdrawing from the skill animation which is around 2 seconds.
If Noel targets a squad with full link, this affects whole squad. A unique flashbang you could say. Unfortunately this does not work on Boss units.

But what about Jupiter Cannons?

You can see that animation continues but Suomi does not take damage from both cannons, just one. Let’s look at the frame before damage.

As you can see you only see a single Shell flying towards Suomi even though both cannon did go through the shooting animation. IT WORKS!